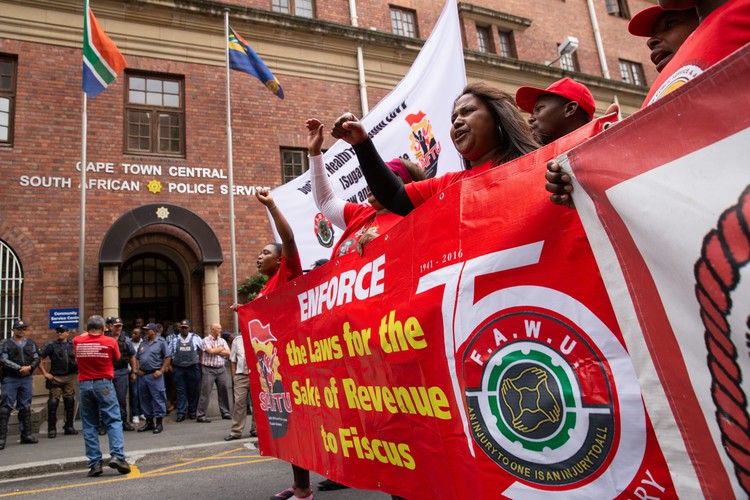 About 150 people gathered outside the Cape Town central police station to protest against police behaviour during their strikes. Photo: Ashraf Hendricks

About 150 workers from Dis-Chem and Blue Ribbon Bakeries, as well as union officials, marched to Cape Town central police station on Wednesday to protest about police treatment of striking workers last year. They also marched to the Department of Labour.

The marchers, from the South African Federation of Trade Unions (SAFTU), and two of its affiliates, the Food and Allied Workers Union (FAWU) and the National Union of Public Services and Allied Workers Union (NUPSAW), handed in a memorandum calling for an official investigation into police behaviour and for the Department of Labour to intervene in Dis-Chem and Blue Ribbon Bakeries.

On 20 December the unions handed in the same memorandum at the police station and the department. They said if their demands were not met they would march every month.

Zwelandile Jamda, a security guard at Dis-Chem, told GroundUp that police had “beaten up” protesting workers in Canal Walk on 5 December.

Attempts to get comment from Dis-Chem and from Novela Potelwa, spokesperson for SAPS in the Western Cape, were unsuccessful.