Unable to afford public transport, this group of 200 people have opted for pedal power 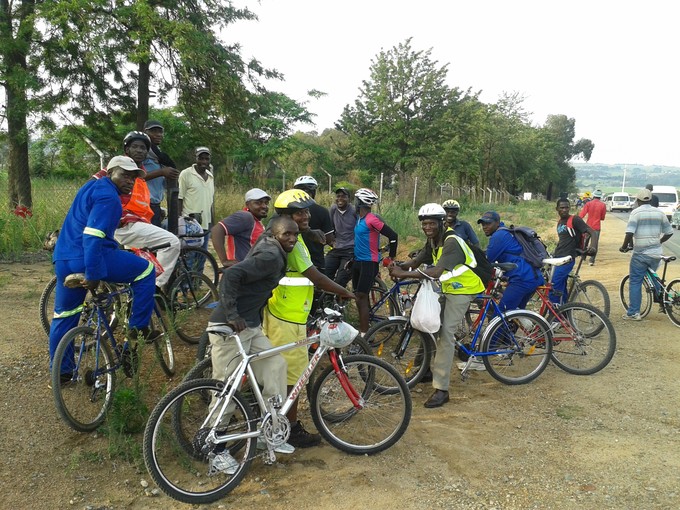 Some of the 200 members of the Diepsloot Cycle Group. Here, assistance is given to one of the cyclists who had a puncture. Photo: Kristen Kallesen

They are a community of nearly 200, who can’t afford public transport to get to their places of work every day. Together, they look out for each other’s safety, meet to discuss routes and even fundraise with the little they earn. They are the Diepsloot Cycle Group (DCG).

Martin Mathe is the president of DCG. Like everybody else in the group, Mathe works odd jobs. He is a painter and gardener. When GroundUp spoke to him, he was working in Lonehill. He told us his 15km commute to work was hard work, but it was better than spending money on a taxi.

“It costs R22 one way to get to work. It’s very expensive. It’s also expensive to fix the bike when it breaks. We have a shop in Diepsloot; that guy [the owner] does repairs for us.”

Mathe says DCG has made requests to the Gauteng Provincial Government, Steyn City’s planning committee and Gekco – the company that started lobbying for a cycle lane on the stretch of William Nicol from Diepsloot.

Kristen Kallesen of Gekco says the idea of promoting cycling as a means of transport came with her project to create “green” environments. She wanted to see less pollution in the Joburg suburbs.

“In 2012, when we were already in talks about creating cycle lanes, I drove past a group of cyclists who seemed to be having a meeting on the side of the road on William Nicol. So, I stopped the car and approached them and found out more about the DCG. I invited them to be part of the planning process, since they were already travelling that stretch of road on bicycles.”

Many meetings followed, as a result of which pedestrian lanes were widened to accommodate cyclists. Kallesen says the existing surface area of William Nicol Road cannot be made wider to allow for more of a safety zone for cyclists, and cyclists are essentially sharing the pedestrian walkways.

Mathe said they have held meetings with various stakeholders about a cycle lane from Diepsloot into Fourways Mall.

He said their biggest concern was safety. “In Dainfern, the taxis have made a rank, and they drive very fast there. They are quick to shout at us when we pass by because [they feel] we are taking up their space.”

It was in this vicinity, three years ago, that Mathe and the DCG lost one of their members when a taxi hit him while cycling to work on William Nicol Drive. Mathe rallied members to donate R5 each for the family of the deceased. It may not seem like a lot, but when a lack of disposable income means one has to leave at the crack of dawn to cycle to Fourways, Sandton and even Bedfordview, R5 is significant.

“We had our last meeting in December at Diepsloot Mall,” he said. “Not everybody can afford helmets and we would like some [reflector] jackets so [motorists] can see us.”

Mathe said he had organised groups of cyclists from his community to leave together for work, scheduled according to the times they need to start working. Members communicate by SMS and phone. Travelling in groups means someone is on hand to assist should something go wrong.

Since publishing this article, many people have contacted GroundUp to offer support. Please contact Martin Mathe, president of the Diepsloot Cycle Group on 078 617 5520.