City appears to have sold property to Growthpoint for R1,880 instead of R5,000 per square metre of possible floor space 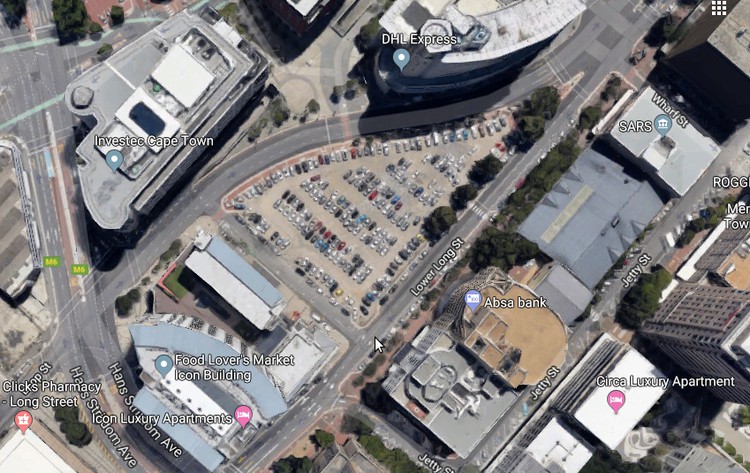 The property in question is currently a parking lot on the Foreshore, as shown in the above image captured from Google Maps.

An apparent valuation blunder by the City of Cape Town appears to have gifted a developer up to R140 million - money that may otherwise have gone to service delivery and upliftment in poor communities.

The City auctioned off Site B in the Foreshore during a “fierce” bidding contest in September 2016. The buyer was Growthpoint, one of the biggest property developers in the country, which submitted a successful bid of R86.5 million.

But recently uncovered documents appear to show that the City sold the property at much less than its market value.

The details are complicated (a more technical explanation is in the grey box below). Here is the simple explanation:

When large developers buy a vacant property — such as Site B which is currently a parking lot — they are interested not only in how many square metres of land the property occupies, but also how many square metres of floor space a future development on the property, such as a tall building or multi-storey shopping centre, could have. This is called the maximum permissible floor area.

When Site B was auctioned by the City, the auction documents said the maximum permissible floor area was 17,500m2. But in 1996, the City zoned Site B and an adjacent piece of land to have a combined maximum permissible floor area of 69,000m2. Growthpoint and the other bidders at the auction would have been bidding on the lower value of the floor area. At this lower value, Growthpoint paid nearly R5,000 per square metre, about market value.

Asked to explain this, Stuart Diamond, the City’s Mayoral Committee Member for Assets and Facilities Management, stuck to the 17,500m2 maximum floor area figure. But did not respond to our further effort to get clarification (see his full response in the grey box below).

Land justice NGO Ndifuna Ukwazi was first to pick up the discrepancy between the maximum floor area that the property was auctioned for, and the floor area which Growthpoint now intends to develop. In a statement, the organisation called for accountability from the City and for a possible reversal of the sale:

“The officials and politicians in charge of managing the City’s land do not seem to understand the obligations that the Constitution places on them to transform the lives of residents. They neither release land for social good like housing, nor, where this is not feasible, for market price.”

Ndifuna Ukwazi advocates for the development of affordable housing on well-located state land in Cape Town. At the time of the Site B auction they wrote to the City’s Property Management department to raise concerns over the sale of this prime land parcel in the city centre. In her response, the City’s director of property management Ruby Gelderbloem said that social housing was not considered viable for the site and that the property disposal programme allowed the City to instead reinvest money “to deliver more services to the benefit of all people of Cape Town” and “to enable social and economic opportunities across the city”.

Page 50 of the zoning certificate for Site B confirms that the permissible floor area for a consolidated parcel of land which includes Site B and one adjacent parcel (block A) is 69,000m2. This is significant, because the auction prospectus for the site said that a development on Site B may not exceed 17,500m2. To support that conclusion, the prospectus quoted a document, known as a substitution scheme, dating to April 1996.

But, Growthpoint’s development application holds that the substitution scheme was amended later in 1996, and that the zoning certificate is therefore correct. According to that certificate, Growthpoint calculates that there is still a remainder of 46,000m2 of floor space (from the original 69,000m2 for it and its adjacent property) which may be developed upon Site B.

If this figure stands (and Growthpoint appears adamant that it does) the developer paid only R1,880 per square meter of permissible floor space for a property that, according to market value, should have sold for nearly R5,000 per the same measure. Further, a development potential of 46,000m2 may have placed the value of Site B up to R227.3 million.

The City appears not to have contested Growthpoint’s claim that it had the right to develop 46,000m2 and republished the company’s development application (including that figure) in a notice in the Cape Argus last week.

Yet, when asked whether the figure was wrong, Stuart Diamond reverted to the substitution scheme figure. He said that the “permissible bulk services on the property are restricted to an area of 17,500m²”. Attempts at reaching Diamond for clarification as to why the City appeared to negate the amendment to the scheme’s conditions were unsuccessful.

“An application has now been received by the Planning Department, submitted by Growthpoint, to amend the conditions applicable to the property in order to facilitate a higher bulk services installation. One will notice that the application is not only applicable to Site B, but includes additional properties or rights in properties (that still need to be acquired from the City) in order to facilitate the envisaged development. The application also requires, inter alia, departure for an increase in the height restriction. Land owners have the right to submit applications to enhance the value of their property, which must follow due process.”

Disclaimer: Knoetze worked for Ndifuna Ukwazi until June 2017. He is currently a freelance journalist and no longer has any affiliation to Ndifuna Ukwazi.