This is not a game, says leader of Bromwell Street residents 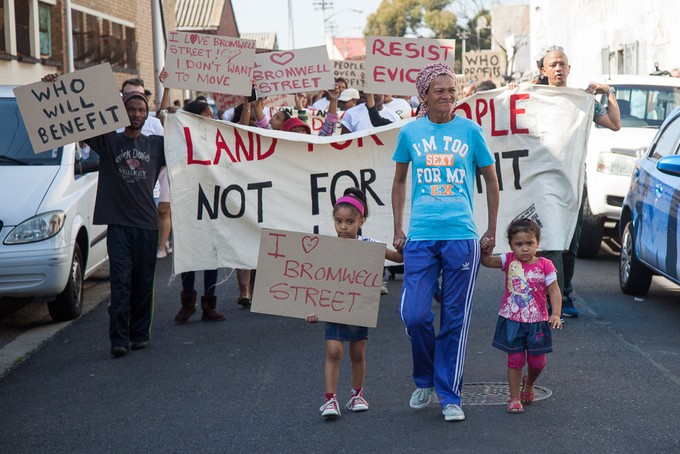 Despite opposition to the pending evictions of Bromwell Street residents in Woodstock, the landlord, The Woodstock Hub, says it cannot grant another extension beyond 9 September.

In a statement published on Tuesday, the company’s director, Jacques van Embden, said: “the property was purchased over two years ago with the intent to add much needed density to the Woodstock area and the end result will be 50 to 75 high-density middle-income rental homes that will not only become additional urban homes, but also create jobs in the process.”

Van Embden has proposed crowdfunding “to create a solution to assisting these families in finding residences.” He said that his company will seed this crowdfunding with R50,000.

He also wrote that with regards to media reports about the residents not being notified or communicated with about the evictions, a number of notices had been issued to residents. Van Embden said that the first notice was issued in 2013 and that residents acknowledged receipt. This contradicts what residents told GroundUp in an article we published on 22 June. The Woodstock Hub declined to comment for that story.

There are over 23 families who are facing eviction. Together with activist organisation Reclaim the City, residents have campaigned against the evictions. On Saturday they occupied The Old Biscuit Mill.

Charnell Commando, who has been living in Bromwell Street for 29 years, said she had seen van Embden’s statement, but they wanted to meet with The Woodstock Hub and the City of Cape Town. “These are our lives. It is not a game. At the moment the only thing we can say is that we want a meeting with them.”

Commando, together with other Bromwell residents, had sent a letter to Van Embden and three other directors, asking not to be evicted and highlighting the effects that the evictions would have on them. The letter also asked for a meeting with the directors so that a resolution that will benefit both parties can be worked out.

That meeting is expected to take place in the next day or two and City representatives are expected to attend.

This is an extract from the letter the Bromwell Street residents sent to the directors of The Woodstock Hub.

The City of Cape Town has a place for people who become homeless due to eviction. It is called Blikkiesdorp. Blikkiesdorp is a relocation camp next to the airport. There are no work opportunities in Blikkiesdorp. Woodstock is far away and travel is expensive. The City is now saying that Blikkiesdorp is full. … [We will be sent] to some other relocation camp like it, or areas on the Cape Flats [where] we will likely be vulnerable and targeted by criminals. Our children risk becoming victims of gangsterism and drug abuse. We stand to lose our entire way of life and our children’s futures in the city if we are made homeless. An eviction of this type will tear apart the community into which we were born, and into which we have invested our entire lives.