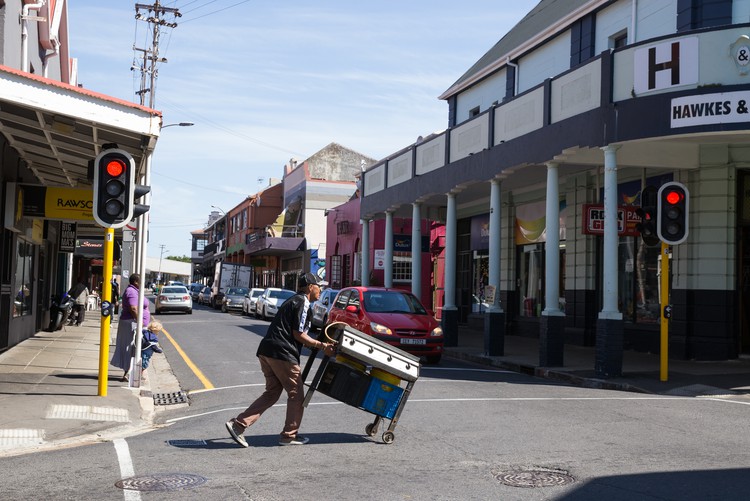 There has been a groundswell of community support for questioning the election of the new committee of the Observatory Civic Association. Photo: Ashraf Hendricks

Residents are up in arms after the Observatory Civic Association (OCA) elected property developers to be the chairperson and secretary of its committee.

Outraged residents of the Cape Town suburb include people who were at the meeting when the election took place and some members of the outgoing committee. Irregularities and corruption in the election procedure are alleged.

The OCA consists of Observatory residents and local business owners and represents the interests of the community. Observatory has historically faced issues with gentrification and large developments.

Although the OCA does not have any direct control over the approval of proposed development projects, its endorsement matters, as the municipality is obliged to take the community’s concerns into account. A question of conflict of interests has arisen as both Kruger and Abader have faced opposition from the OCA or unsuccessfully lobbied it for support for developments they were involved in.

In an email sent out to residents, Leslie London, who was elected committee member for Large Developments, says there were “a number of irregularities” on the night. The register showed several entries that lacked addresses, had incorrect addresses or addresses outside the OCA’s boundaries. To be eligible to vote one has to be a paid up OCA member with proven ownership or occupancy of a property or business in Observatory.

“One member gave as their address a site that was a vacant construction site where a building had just been demolished,” said London. “There were other alleged issues about new members being welcomed to sign up long after the AGM had commenced, members having their membership fees paid on their behalf so that they could sway the vote and a number of other reported irregularities.”

London said 17 of the 59 people who voted were of questionable eligibility to vote.

After consulting with the rest of the 2016 committee, Carolyn Neville – the outgoing chair – declared the elections null and void. Residents were informed via email on 6 November. She cited ineligibility of the irregular voters according to the association’s constitution. The mail announced a re-run to be held at a new AGM on 28 November. The outgoing committee would manage the OCA in the interim.

Nine days later, Neville received a letter from Cliffe Dekker Hofmeyr (CDH), lawyers representing Kruger, Abader and Van Zyl, threatening to interdict the AGM at her cost. The same letter contested the claim that ineligible voters had swung the vote, citing section 7.1 of the OCA constitution: “The membership shall be open to all owners and occupiers over the age of 18 years of property in Observatory”, and saying those who were ineligible were too few to impact the election result.

Neville resigned and Tauriq Jenkins, vice-chairperson in 2016, took over as acting chairperson.

At an OCA committee meeting held on 23 November, Jenkins scheduled a Special General Meeting (instead of an Annual General Meeting, as initially scheduled) for 28 November at which an independent chair would preside over a discussion of the irregularities in the October election and a vote on the course of action would be taken. According to London’s email, Kruger, Abader and Van Zyl were present and raised no objection.

But the next morning, Jenkins received a letter from CDH threatening to interdict the SGM at his cost and citing the points made in the letter previously sent to Neville.

Kruger also sent an official OCA email out to members declaring that Jenkins and Neville had no authority to convene any meeting of the OCA and that claims about irregularities in the election had “no basis in law”.

He also told members that a monthly OCA meeting was to be held on 28 November in place of the SGM scheduled by Jenkins, at which he invited members to raise concerns about membership and the OCA constitution.

Standard OCA committee meetings are distinct from an SGM in that OCA non-committee members have no voting powers regarding the issues being tabled.

There has been a groundswell of community support for questioning the election. It remains to be seen whether or not Kruger, Abader and Van Zyl will interdict the SGM, but an online petition to hold new elections has already been signed by over 260 Observatory residents, including 69 OCA members, according to Murray Hunter, a resident. This would mean that the OCA members supporting a re-run of the election outnumber those who voted on 31 October.

Asked to comment on allegations of election rigging, Abader told GroundUp that the old OCA’s policies were actually good for him as a developer because they “contribute to increasing property prices and rentals”. He said that the OCA should rethink its policies on property development in line with his vision to build an “all-inclusive society” through the relaxation of heritage and parking restrictions.

“Blocking each and every proposed development is not good for our area and community,” he stated.

Kruger withheld comment saying that the allegations made in London’s email would be discussed at the meeting on Tuesday night.