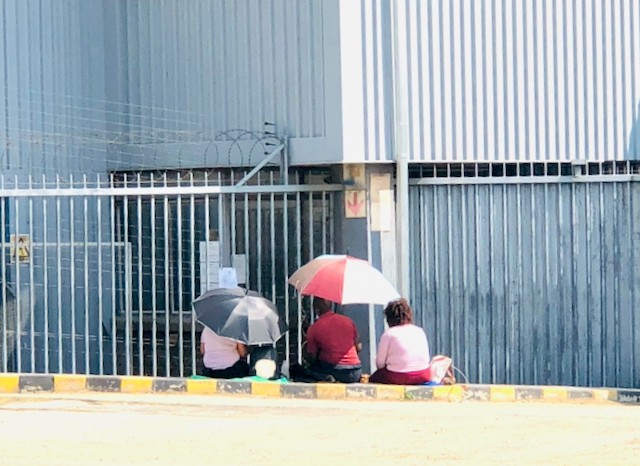 Although Wireforce in Germiston has not promised them jobs, people sit and wait outside its premises from as early as 6am, hoping for an opportunity.

Wireforce, a manufacturer of wire and wire products in Germiston, has become a job-seekers hotspot. Although the company has not promised them jobs, people sit and wait outside its premises from as early as 6am, hoping for an opportunity.

The people GroundUp spoke to had lost their livelihoods due to the Covid-19 pandemic or had failed to access unemployment benefits. Some said the Covid grant was too small. Tired of sitting at home, they came to Wireforce, with their CVs, certificates or driver’s licences in hand, prepared to take any job.

Bonisile Khuzwayo, a mother of two from Ramaphosa informal settlement, sitting under an umbrella, says, “One should never lose hope. When the job doesn’t come while at home, why not go to the job?”

Every month she sends money to her children staying in rural KwaZulu-Natal with her mother. She has a gardening job which earns her R700 a month. She can barely afford to buy food for herself.

“One day is one day,” she says. “Surely one of these big companies has enough space to give me just a job as a general hand.”

Also waiting was Pretty Masiya. She says she has been looking for a job ever since she received her project management diploma eight years ago. She has been living off the child grants for her two children.

“I am humble enough to take any job which will help me work myself to the top,” she says.

A group of men with code 10 or 14 driver licences were also waiting. “I can drive anything, even the biggest of trucks you see parked over there,” says Kwazi Masondo, pointing at a fleet of trucks. His driving job of seven years ended with the pandemic. He says his last provident fund payment was in December. “I have to find a job soon or my family will starve.”

Yedwa Nxumalo, a machine operator, and father of five, says, “Last night l slept on an empty stomach. I have been waiting for my provident fund for a long time but nothing has come yet.”

Human Resources Manager for Wireforce Alsie Hoole said, “We feel great sympathy for people standing outside of our premises in the hope of working for us.”

“The normal procedure is that we advertise internally as required by Employment Equity. Depending on the skill level we need, we look at over 500 CVs on the database, some of which we have taken from the people standing outside. When there is a vacancy we ask people with the right skills for CVs.”

“Currently we are not hiring and may not be hiring soon as we are in short supply of metal. Our suppliers are failing to supply the demand that we are asking for.”

“There are normally 30 or 40 people standing outside hoping that they can be called to fill up a position, but it can’t simply work like that. Our company is large, offers learnerships and has many initiatives to upgrade employees once they are inside which is why people look at the possibility of employment with us. If we could employ everyone we would, but it’s not possible.”