Building, where toilets didn’t work and fire escapes were blocked, was reopened this week 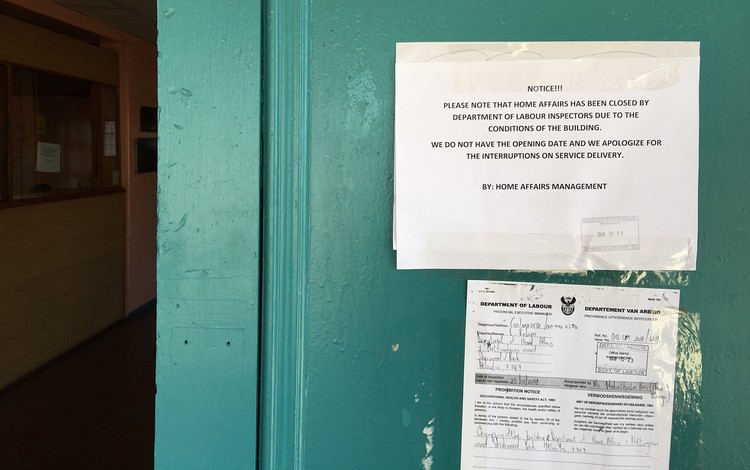 Notices on the door of the shut down Home Affairs office in Atlantis on Friday. Photo: Peter Luhanga

Afikile Nono lost his wallet with his bank cards and his new smart ID card nearly two weeks ago. The 24-year-old unemployed man from Witsand went to the Home Affairs office in Atlantis on Friday. It’s the nearest Home Affairs office to his home about 10km away. He left at 8:15am and got there at 9:50am.

When he got there he was told to go back home because the office had been shut down by the Department of Labour.

Inspectors sealed off the offices on 23 October, after finding the building not suitable for human occupation. Its derelict state contravened the Occupational Health and Safety Act.

We visited the offices at the same time as Nono and saw several people being turned away. A notice bearing a Department of Home Affairs stamp, placed on the main entrance door says:

“Please note that Home Affairs have been closed by the Department of Labour inspectors due to the conditions of the building. We do not have the opening date and we apologise for the interruptions on service delivery.

The stamp was dated 30 October.

A security guard at the main door told the Home Affairs clients that they should go back home and showed them the two notices.

Some, like Louisa Damon, came as far as Darling on the West Coast. “I came to collect my ID. I don’t know what to do,” she said.

Eva Davids lives in Witsand’s Omongeza Informal Settlement. “I am beyond angry. I walk up and down and each time I get here they say it’s still closed,” she said.

The derelict building is owned by the City of Cape Town. It is deteriorating because of neglect. Home Affairs officials, who only agreed to speak on condition that their names be withheld as policy prohibits them from talking to the media, said they had been working in this bad environment for a while.

They said inside the offices, the toilets were not working and there was no potable water and the paint was peeling off.

GroundUp was blocked from entering the offices.

Department of Labour spokesperson Teboho Thejane confirmed that an inspection was done on 23 October and a prohibition and contravention notice was served.

“During the inspection and subsequent meeting it was established that the building belongs to the City of Cape Town and Home Affairs leases the section they occupy,” said Thejane.

“The officials from the labour department had identified structural defects that were deemed uninhabitable and not conducive for both clients and officials,” said Mokgola.

Thejane said that, after being provided proof that the concerns were addressed, the prohibition notice was revoked on 5 November.

Mokgola also confirmed the reopening of the office to GroundUp.

“The defects were fixed over the weekend and the notice has since been lifted following an assessment by officials from the labour department,” said Mogola.

Questions seeking comment were sent to the City of Cape Town on 5 November. Jan Kruger from the City’s media team said: “The City is currently investigating this matter and will respond as soon as we have all the relevant information.”