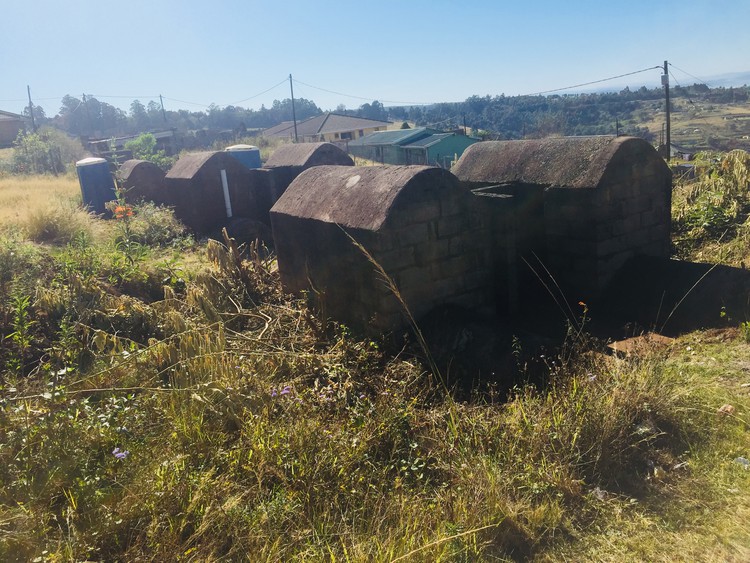 These pit and portable toilets are used by learners at Insilka High School in Sweetwaters, Pietermaritzburg. Photo: Nompendulo Ngubane

Insika High School in Sweetwaters, Pietermaritzburg, is one of many schools in the province that may not be ready to welcome learners back next week.

The lack of infrastructure at the school would make it near impossible for teachers and learners to safely and adequately maintain hygienic practices as required by the regulations.

“Our problems at school are beyond the virus. The school has a lot of problems. There’s nothing new. We’ve never had enough resources,” said Sibusiso Ntuli, chairperson of the School Governing Body. Ntuli said they have been knocking at the department’s door for help since 2011.

He explained that their problems predated the coronavirus as many teachers and learners at Insika still used pit and mobile toilets. Other issues included dilapidated classrooms with broken windows and doors. “We applied to the department for toilets. In our application, we also raised the issue of water shortages. Until now those issues have not been resolved,” said Ntuli.

He said the funds they collected from 490 learners currently enrolled at the school was not enough to pay for renovations. “We have only R30,000 which is not enough to cover the school’s needs. There was a discussion about closing down the school. But we agreed not to,” he said.

A teacher at Insika, who asked not to be named, told GroundUp that teaching in poor conditions had become part of their daily struggle. “We still use pit toilets with the learners. The teachers share two pit toilets and two mobile toilets. We are not ready and will never be unless the school is being maintained … I feel sorry for the learners,” she said.

The teacher said promises from different donors were made over the years but never materialised. “The truth is we are not ready and we don’t feel safe. This pandemic has exposed the department. Schools are being neglected and it’s time they do something,” said the teacher.

On Monday, MEC Kwazi Mshengu visited Sanzwili Primary, Bongudunga High in Greater Edendale, and Insika to inspect its readiness to open on Monday, 8 June. All of these schools were declared not ready to be opened. On Friday last week, 4,400 of 6,000 schools in KZN are ready to open, according to Mshengu.

“I can confirm that the school [Insika] was not ready. The principal indicated that they have a problem with water. The person who was appointed to install the septic tank only arrived on Monday. We have made arrangements with the district mayor to immediately make provisions for water once the tank is installed,” said Mshengu. He said it was concerning that there were insufficient masks delivered for learners.

“By the end of (Monday) there should be chemical mobile toilets at the school. We don’t support the discussion of closing the school. It is in the centre of the community and it cannot be closed. The matter of renovating the school has been discussed with colleagues from Public Works.”

On Tuesday, Ntuli told GroundUp that they had started fixing windows at the school and some mobile toilets were delivered.