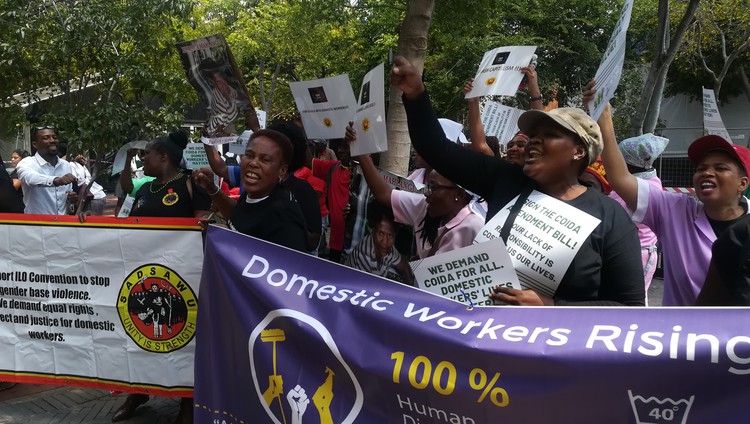 Domestic workers demonstrated outside the Constitutional Court which was hearing argument on whether or not the law excluding them from workers’ compensation is unconstitutional. Photo: Zoë Postman

The Department of Labour is ready to pay compensation for injuries, illness and death at work to domestic workers, the Department told the Constitutional Court on Tuesday.

The Court has been asked to rule on whether or not parts of the Compensation for Occupational Injuries and Diseases Act (COIDA), which exclude domestic workers from claiming from the Compensation Fund, are unconstitutional.

The case was taken to court by Bongi Mahlangu, daughter of Maria Mahlangu, a domestic worker who drowned in her employer’s swimming pool in March 2012 while on duty. When Bongi Mahlangu approached the Department of Labour to enquire whether she could claim any compensation, she was informed that because her mother was a domestic worker, she was not entitled to claim.

Bongi Mahlangu, with Social Economic Rights Institute (SERI) and the South African Domestic Service and Allied Workers Union (SADSAWU), brought the matter to the Pretoria High Court, which ruled in May 2019 that the legislation that excluded domestic workers was unconstitutional because it violated domestic workers’ rights to equality, dignity and access to social security. In October, the Court ruled that the declaration of invalidity must be applied retrospectively.

SERI sought to get both orders confirmed by the Constitutional Court. The Department of Labour did not oppose the application.

Justice Nonkosi Mhlantla raised concerns about the financial effect of a retrospective judgment on the Compensation Fund. But Advocate Kgomotso Moroka, representing the applicants, said the Department of Labour had not provided sufficient evidence that there would be a significant financial impact on the fund which could lead to claims not being paid.

Justice Leona Theron asked, “Because we have no evidence, does it mean that the court must grant the order? What about the possibility that the retrospective order may lead to the collapse of the fund?”

“If that was the case, Justice Theron, then surely the fund would have told you so,” responded Moroka. She said the respondents had had a lot of time to present such evidence but had not done so.

Advocate Hamilton Maenetje, representing the Department of Labour, said in his submission that the Department was ready to pay compensation to claimants.

He said that actuaries hired to look into whether the Fund could afford to pay claims retrospectively could not predict how many claims would come after the order was granted. But he assured the court that the Department would pay successful claims using the reserve fund.

He asked Moroka how commissioners handling the claims would be able to assess cases dating from 15 years ago, especially if the employers did not know about the injury or accident.

Moroka said the onus would be on the claimant to prove that there had been an accident – “to bring evidence, bring medical reports and bring witnesses before the commissioner”.