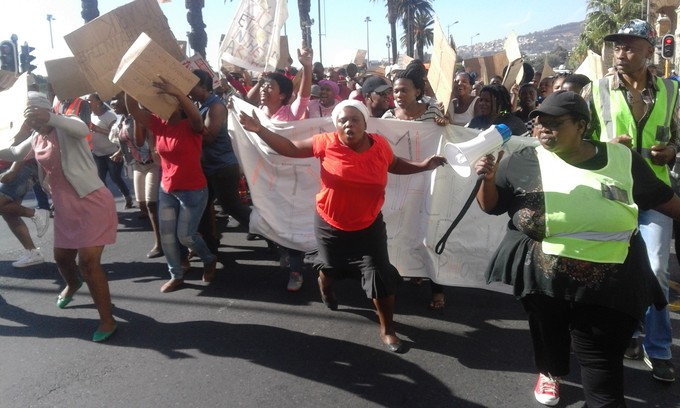 About 150 residents of Tsunami informal settlement in Delft marched to the provincial government to hand over a memorandum demanding electricity and toilets in their community.

The community had electricity which they say was taken down by the City due to illegal connections.

Community leader Kwanele Mcaleni said they have been asking the City and the Province for a long time to have toilets and now they are asking for electricity.

He says they have been given the run around every time they go to the municipality.

Another resident, 61 year old Kholeka Mdoda, who has been living in Tsunami for over five years, said they have marched to town five times already and they still haven’t got answers.

“The streets are dark and people are being robbed and we are being raped. They come into our houses, especially us old people, because they know we cannot do anything. Lighting a candle is not as easy as switching on a light switch and I can’t leave a candle on the whole night,” said Mdoda.

Another resident Nomthunzi Nondlala, who was carrying a child on her back says the situation is very bad. That is why they have given up a day’s work to come to town.

“They are not taking us seriously. We do not get anything. People are getting killed. Just last week a child was raped, and another person was killed. We can not do anything because it is so dark and someone can come out of nowhere and rob you then run. We are scared to even go to the shops,” she said.

“This is not a way to live. We have children and we have to use paraffin which is not safe. I have a small child and must always have light in the house which is not safe because I can only use a candle. We will not vote. We did not register for a reason. We are not given anything,” said Nondlala.

He addressed the crowd of angry residents and said that Tsunami has been chosen as one of the areas that will be part of the Southern Corridor development among other informal settlements like Vukuzenzenzele, Kanana, Thabo Mbeki, Barcelona and Europe.

“This then means the settlement will receive priority attention and will get an … upgrade. You all know that you are staying in a graveyard area. We have identified land in other areas so that the graves could move to other places and you could remain there,” said Mguli.

“We have a team that we have hired that will go and assess the area before the end of May,” he replied.

He promised that the development will provide the residents with plots, houses with toilets and electricity but did not mention when that will be done.

The protesters then demanded to see proof of this on paper. Three representatives were taken inside Mguli’s office to see the documents and report back to the community.

The protesters gave the department seven days to reply to the memorandum.