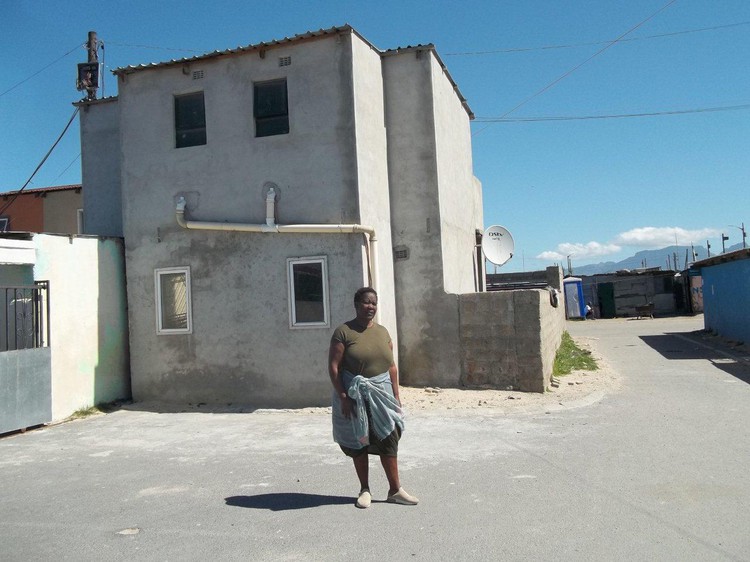 Bukelwa Wanyaza saved for years from her salary as a petrol attendant to build four small rental flats in Delft. While business once boomed, she has been losing tenants due to frequent electricity blackouts. Photo: Vincent Lali

GroundUp spoke to homeowners and landlords in the township who blame frequent blackouts on illegal electricity connections by residents of Tsunami informal settlement. They say the interruptions in electricity supply are chasing away tenants.

Residents of the houses near the informal settlement say they have been complaining about the growing number of izinyoka connections since November 2018. These connections are made directly to transformers and street lights and caused electricity boxes in the neighbouring houses to explode, they say.

Bukelwa Wanyaza says she spent years saving her salary as a petrol attendant in Belhar to build four small rental flats in Delft. Wanyaza said she completed the construction of two flats in 2009. As business boomed, she built another two units in 2014 which she rented out for R900 per unit per month.

“After the illegal connections damaged my electricity boxes, two of the six families moved out”, she said, because they did not have electricity, she said. In a bid to retain her remaining tenants, she put a gas stove placed in one of her vacant flats for all tenants to cook and boil water.

Bongiwe Damba rents out two shacks at R450 each a month and a shipping container that belonged to her late mother, at R800. When the electricity troubles started, Damba was forced to lower her rental fee to R300 per month. Now, the tyre repair company which rented the container, and the tenants in the backyard shacks, have left.

“I can’t rent out the shacks to make money to feed my kids because I have no access to electricity.”

Community leader Nosicelo Bobi said, “Most property owners borrowed money from the banks hoping that to use the rent money to pay off their debts. Now they can’t service their debts,” she said. Bobi said criminals were now breaking into and vandalising the vacant spaces.

Provincial Human Settlements spokesperson Muneera Allie, said the department was in talks to relocate about 200 Tsunami families. Land near the informal settlement has been identified “with the intention to develop transitional units”.

“The department has had to contend with budget cuts due to the pandemic. At this stage, there are no funds available for both the relocation area and the development of the Tsunami informal settlement. The upgrade of Tsunami will start as soon as project funding becomes available,” said Allie.

Kwanele Mcaleni, a community leader in Tsunami, said services were needed urgently. “The housing department doesn’t have to build us temporary houses before it develops Tsunami. We will relocate with our shacks and stay in them until the development is finished,” he said. Mcaleni said residents were threatening to protest should there be any further delays from the government to develop Tsunami.

Tsunami resident Nikiswa Cengimbo agreed that illegal connections were dangerous and had cost shack dwellers their homes and sometimes their lives in fires. But, she said, “most of us are unemployed and rely on our kids’ grants to survive, so we battle to get money to buy paraffin”.