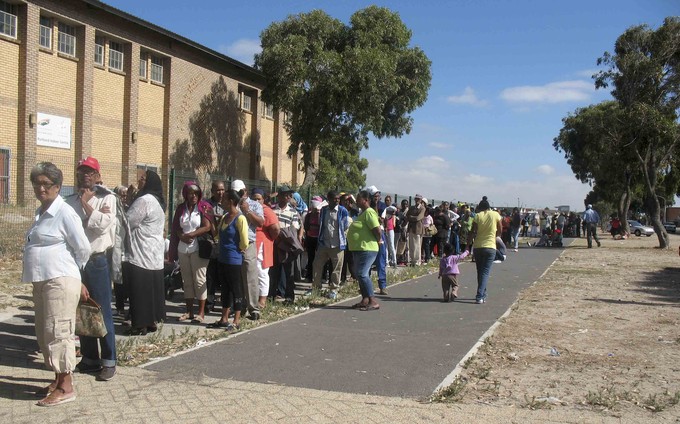 An early morning queue outside the Sassa office in Delft. Photo: Barbara Maregele

The South African Reserve Bank has entered the ding-dong court battle over deductions from the bank accounts of social grant beneficiaries, warning of possible conflicts of interest involving Net1, the powerful company which manages the grant payments.

In court papers, Arif Ismail from the Reserve Bank and Thokozani Magwaza from the Department of Social Development both raise questions about the role of Net1 and its subsidiaries.

Their affidavits fuel concerns that money is being drained from the grant payment system into airtime, electricity, and loan repayments to companies in the Net1 group, without the permission of the grant recipients and sometimes using their confidential information.

Thousands of recipients of social grants all over the country have been plagued by deductions for airtime, electricity and loan repayments, including repayments on loans from Net1 subsidiary Moneyline, which they say they never authorised.

Only one deduction - for funeral insurance - can be legally made from the account of a social grant beneficiary, and under new regulations published in May by the Department of Social Development, even this deduction will no longer be allowed from children’s grants.

Children’s grants include the foster child grant, the care dependency grant and the child support grant.

But the SA Social Security Agency (SASSA) says deductions are continuing against the law. SASSA brought criminal charges in Pretoria last month against Cash Paymaster Services, the Net1 subsidiary which has the contract to pay out the grants, and Grindrod Bank, which provides the accounts into which the SASSA grants are paid, in a bid to compel the two companies to comply with the regulations.

Net1, Cash Paymaster Services and Grindrod retaliated by taking SASSA and the Department to court in their turn, alongside Moneyline and Smart Life Insurance, which are also in the Net1 group, Finbond Mutual Bank and payment company Information Technology Consultants. They questioned SASSA’s interpretation of the regulations and succeeded in getting the court to impose a freeze on the criminal charges until a court hearing in October.

The Reserve Bank, as the manager of the National Payment System through which banks clear customers’ payments to each other, is one of the respondents in that court case.

In his affidavit, Ismail, who is acting head of the National Payment System, is careful not to take sides. He says the Bank strongly supports government attempts to curb debit order abuse in the form of illegal debits and unauthorised deductions (those made without consent). But he warns that suddenly stopping debit orders would disrupt the system and create problems for account holders.

However, Ismail also points out that debit order abuse may be a symptom of a larger “design issue”.

He points to Net1’s role in both the payout of grants and the marketing and provision of products or services such as airtime, electricity and loans to grant beneficiaries. “This may lead to possible conflict of interest and create perverse incentives which may increase the likelihood of abuses,” Ismail states in the affidavit.

Some 2.4 million debit orders from the accounts of grant beneficiaries, worth about R550 million a month, are affected.

Part of the argument turns on when exactly the deductions are made.

Each month, SASSA pays Cash Paymaster Services money for the social grant payments to be made that month. The funds are then paid into the grant beneficiaries’ accounts at Grindrod Bank, to be accessed via SASSA-branded debit cards issued by Grindrod.

Net1 acknowledges that direct deductions made before the money is paid into the beneficiary’s bank account are restricted by law. The Act does not, however, prohibit debit orders or other transactions effected after payment to the beneficiary”.

Net1 argues that the law allows the Minister of Social Development to regulate deductions made directly from social grants, but not deductions from beneficiaries’ bank accounts.

“SASSA has confused a debit or stop order processed from a beneficiary’s bank account with a ‘direct deduction’ from a social grant,” says Net1 in its papers to the court.

Net1 argues that SASSA’s interpretation of the regulations on deductions is “patently wrong”and has caused “uncertainty, disruption and distress in the market”; that it deprives beneficiaries of convenience and security; and that it affects 1,370 creditors who are paid through debit orders on the Grindrod accounts. The creditors include Finbond and Smartlife.

But Magwaza, who is acting director general in the Department of Social Development, says if this interpretation of the regulations were adopted, 10 million SASSA accounts, servicing 16 million social grant recipients, would be at risk.

“SASSA receives many complaints from beneficiaries about unauthorised deductions. These include loan repayments, prescribed debt, multiple funeral schemes, advance electricity and airtime, often without their knowledge or consent,” says Magwaza in his affidavit.

“This growing national phenomenon of unlawful and unauthorised debit deductions undermines the very object of the Act and the grant system. It robs the poor of the very safety net that

government created in order to ameliorate the plight of the poorest of the poor in society.”

The rate of debit deductions “appeared to increase significantly” when the contract to pay out the grants was awarded to Cash Paymaster Services, says Magwaza.

He says there is also evidence that financial institutions linked to Net1 offer loans to grant beneficiaries.

Though its contract with SASSA compels Cash Paymaster Services to protect the confidential information of grant beneficiaries, access to confidential data - including identity numbers, bank account and contact details, and biometric data - is being used in the marketing and sale of financial products, Magwaza says.

“‘Big Sharks in suits are now in the tank’” he warns, echoing minister Bathabile Dlamini, “with almost unrestricted access to funds in the SASSA accounts of grant beneficiaries.”