“The municipality promised us RDP houses in a safe place, but more than five years later we’re in the same situation” 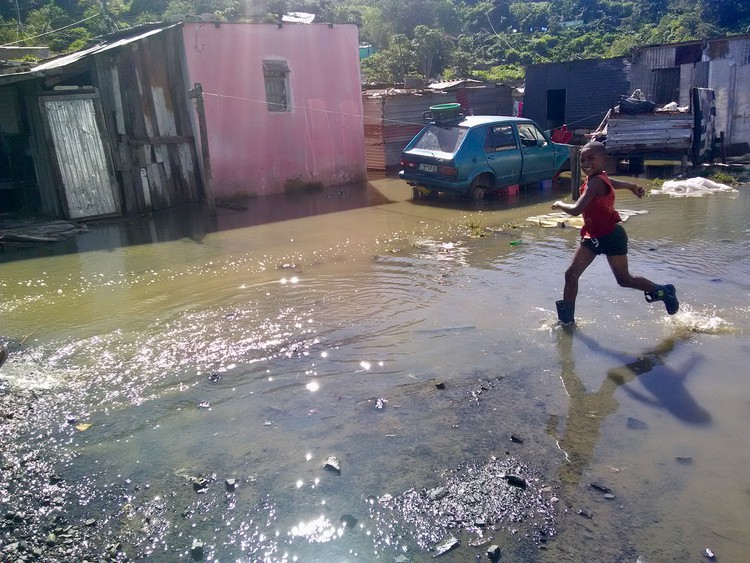 The small community of Port St. Johns in the Eastern Cape is picking up the pieces in the aftermath of floods. More than 300 people have been displaced according to the municipality.

Green Farm informal settlement was among the worst affected places in the province. Many homes were submerged. Scores of families were evacuated and housed in the town hall. The water subsided and they started to return home on Friday.

Green Farm resident Nokwazi Gcaba was left with only the clothes on her back. “I wasn’t even home when the floods began. I came back home on Monday to see that my house had been destroyed. It was a sad sight, but things could have been worse – we could have been inside when the house collapsed.”

Nohombile Sago, who has lived in Green Farm for the past ten years, said this was not the first time. “Back in 2013 a similar disaster happened and the municipality promised us RDP houses in a safe place, but more than five years later we’re in the same situation,” she said.

Port St. Johns Mayor Nomvuzo Mlombile-Cingo said, “We have an ongoing land claim issue with the people of Caguba. So that has caused a challenge in moving the Green Farm community. We need to first secure land and build houses before we can remove them.”

But the mayor placed some of the blame for the disaster on the residents. “Some people have built on top of [storm water] pipes that were supposed to be changed. Another problem is that some of the pipes in the storm water drainage system are old pipes that cannot accommodate the way Port Saint Johns is today,” said Mlombile-Cingo.

Various government agencies and departments, including SASSA, COGTA, the SANDF, and the health department, provided assistance to the flood victims.

“We’re very lucky that no one died here in Port St Johns in these floods, but the damage throughout the whole province is shocking. KwaZulu-Natal and the Eastern Cape should be declared disaster zones,” said resident Stephrina Mbuthuma.

But MEC for Cooperative Governance and Traditional Affairs Fikile Xasa said assessing the damage is still ongoing. “It is the assessments and recommendations from the affected District Joint Operation Centres and municipal councils that will inform us whether or not a provincial state of disaster will be declared in terms of Section 41 of the Disaster Management Act,” said Xasa.

On Monday, Mamnkeli Ngam, COGTA spokesperson, said a meeting will be held on Tuesday at 10am to reflect on the situation and whether to declare a disaster.