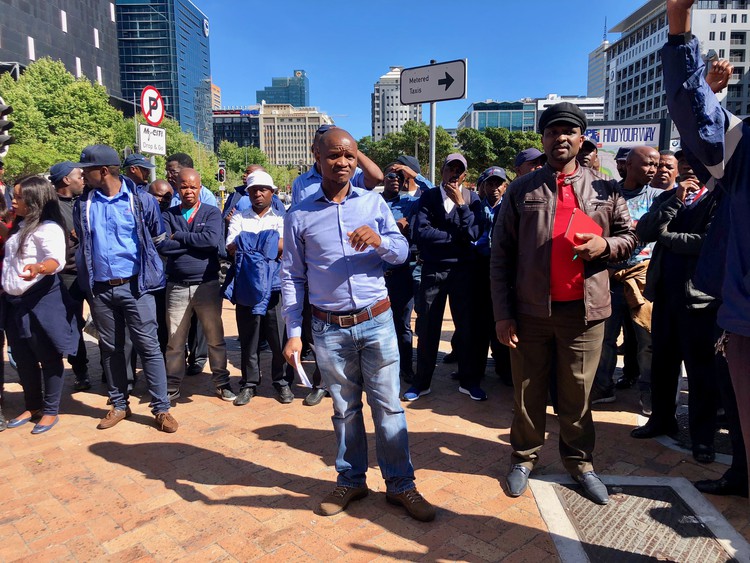 A failed motion to insource MyCiTi workers, put forward by the EFF at the City of Cape Town’s latest council meeting, spells a dead-end for hundreds of striking workers who have been dismissed from their jobs.

After over three months of protest action over what they say is poor treatment by the MyCiTi Vehicle Operating Companies (VOCs) the only thing left for the strikers is to ask their former employers to give them back their jobs, said striking workers spokesperson Patrick Mabindisa.

About 260 MyCiTi workers went on an unprotected strike on 15 October last year. The strikers, including drivers, cashiers, and station cleaners, frequently clashed with police on the Civic Centre station deck. In mid-November they managed to gain access to the Civic Centre and shut down the City’s nerve centre from about 9am until after lunchtime.

The workers claimed the VOCs contracted by the City to run the MyCiTi service were failing to uphold their contractual obligations and they wanted to be employed directly by the City.

Initially, says Mabindisa, they intended to only down tools for a day and protest outside the Civic Centre so they could air their grievances to City officials. “We only wanted to be there for one day,” he said, “but no-one came out to listen to our concerns.”

Their quest to be insourced received political support from the EFF which put a motion to council on 31 January, but was not successful.

Council Speaker Dirk Smit would not release the vote count, or even confirm that a vote had taken place. Smit said the information would be contained in the minutes at the next council meeting.

But the motion was published on the council agenda and EFF councillor and provincial secretary Andrew Arnolds said the majority DA voted against insourcing.

Arnolds said he believed the motion was valid, as workers on Johannesburg’s Rea Vaya bus rapid transit system worked directly for the City, which was also led by the DA. He said the EFF had working relationships with the DA in other metros and the insourcing could have been done in stages.

The City has consistently said 12-year contracts, which involve the VOCs employing workers directly, have been signed with the VOCs and these could not be altered.

However, Arnolds said he believed the VOCs had not complied with a number of obligations and the contracts could be considered invalid and renegotiated. However, he said, the City had not provided him with the VOC contracts.

Repeated requests to the City for copies of the VOC contracts have been ignored.

Transport and Urban Development Mayco Member Felicity Purchase last week repeated that the City cannot insource the MyCiTi workers as it is committed to “long-term operational empowerment of the minibus-taxi industry by signing 12-year contracts with (VOCs) in November 2013”.

Purchase said a wage agreement had been struck at the Road Passenger Bargaining Council in May last year following a four-week strike by MyCiTi workers. Part of the agreement was that there would be no strike action over wages and terms and conditions until 31 March 2020.

“The VOCs and station management contractor followed due process in terms of the Labour Relations Act in dealing with those employees who participated in the [recent] unprotected strike. Some of the striking employees returned to work in December 2018 and received written warnings, however, some employees did not return to work and were dismissed after they failed to attend disciplinary hearings.”

She said if workers were unhappy with the outcome of disciplinary hearings, they could approach the Council for Conciliation, Mediation and Arbitration (CCMA).

Mabindisa disagreed that workers broke the bargaining council agreement of May last year. He said the agreement had not been resolved as a task team had been set up to investigate the issue of night shifts. He said they were supposed to report back in September last year but no report or conclusions had been provided to the workers.

“I can assure you they are fully compliant,” Wilson said.

He said at the City’s request the bargaining council had tried to facilitate a meeting between the workers, the City, and the VOCs, but hit a snag because the workers did not want to be represented by the unions.

Wilson said there was no reason for the workers to strike. If the VOCs were violating their contracts the workers could have followed the proper process and got a certificate to strike. “They didn’t have to lose their jobs.”

The strike threw the public transport service into disarray for three-and-a-half months, with one Hout Bay commuter telling GroundUp it was only now beginning to settle down, although the evening busses were still unreliable.

In December, Blouberg resident Tania Smit, who was job hunting, told GroundUp how she had to wait hours for a bus to arrive and often missed job interviews as a result.

At least five buses were set alight during the strike last year, seriously injuring a driver and costing up to R22 million in damages.

This article was written for GroundUp by West Cape News