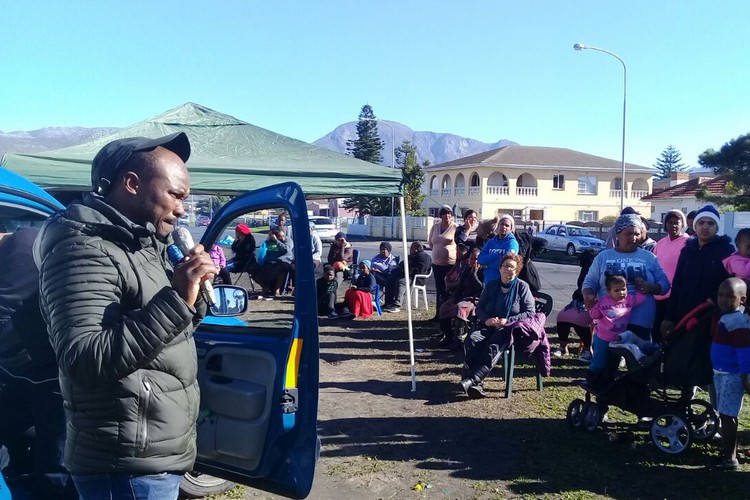 Community leader Xolani Cekiso speaking to residents outside Steenvilla in Steenberg on Thursday. The group were expecting to meet with Cape Town Mayor Patricia de Lille to discuss the recent evictions at the social housing complex. Photo: Chumani Mazwi

By Tariro Washinyira and Chumani Mazwi

About 60 people gathered outside Steenvilla in Steenberg on Thursday. The group were expecting to meet with Cape Town Mayor Patricia de Lille to discuss the recent evictions at the social housing complex.

The group waited several hours before they were informed that De Lille was not coming. Zara Nicholson, De Lille’s spokesperson, told GroundUp that the mayor not aware of the meeting.

This was disputed by community leader, Andile Nomqolo.

About 15 families live in makeshift tents made out of black plastic bags outside the complex on a pavement along Military Road. They were evicted from Steenvilla on 6 June for not paying rent. Armed security guards patrol the complex. Since then the evictees have sometimes protested, including barricading Military Road with burning tyres.

When GroundUp arrived on Thursday, some of the evictees including children and people in wheelchairs, sat around a fire to keep warm. Some people danced and sang struggle songs. After several hours of waiting for De Lille, the vibrant atmosphere of the crowd subsided and many people left.

Steenvilla tenant, Rashied (not his real name), said he was offended that the mayor did not show up for the meeting. He said the babies and young children of evicted families were forced to sleep outside in the rains. “The parents are too scared of tactical response to seek help inside.”

Rashied said his family was also facing eviction because they owe the housing company R34,000. His monthly rent is R3,000, which he says he is unable to afford.

“I am in the process of selling my car to cover the arrears. My wife was retrenched in April 2017. We tried to pay rent last year. We are struggling and have two children at school. My wife can’t look for work because she has to look after the child.”

Community leader Xolani Cekiso told the group outside Steenvilla, “The Democratic Alliance is using both black and coloured people to get power and then throw them away like a condom that has just been used.”