Day Zero in “The Place of Water” 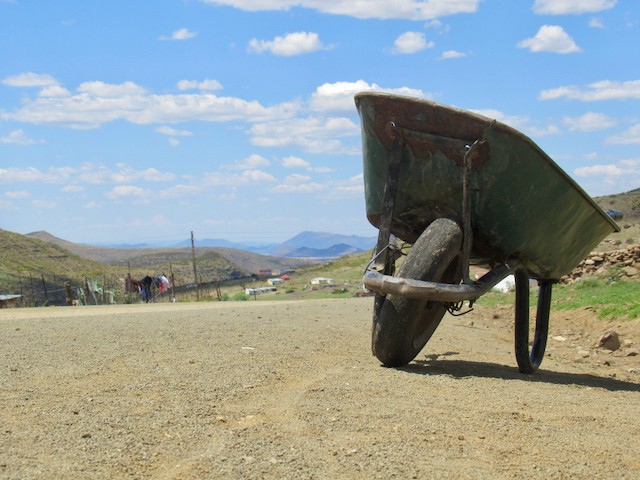 While Tsitsikama means Place of Water, a prolonged drought and lack of infrastucture are forcing villagers to cart water from far away. Photos: Elsabé Pienaar

A prolonged drought has taken a heavy toll on the community of Tsitsikama, a remote village in the mountainous old Ciskei, about 50km from Queenstown. Here, subsistence farmers toil hard to make a living off the land.

On a Friday morning, the wind howls around an old school building where village meetings are held. “This is not a formal meeting,” stresses Chief Loyiso Mabece. “But December lies ahead and we need to be prepared.”

“Large numbers of visitors return to their home village over the holidays. Our municipal water system is already unable to keep up with demand,” says Mabece.

Tsitsikama has not been left untouched by the pandemic and it has had Covid-19 deaths. Villagers queue for hours outside the clinic situated at the far edge of town. Water is tapped from the clinic’s tank.

“In the time of a pandemic, it is a risk to crowd around a health facility for hours at a time, but what else can we do?” says Asanda Ndata, a young policeman, visiting home for the weekend. “As if it is not challenging enough that our village is isolated, undeveloped and impoverished, most residents can’t even grow vegetables to be self-sustainable, despite the wonderful fertile soil we have. Carting water for household use means a trek of between two to five kilometres for most, and we have a large number of elderly people.”

Simphiwe Peter, pushing a wheelbarrow with a 35-litre bucket, says, “This is my fifth trip to the clinic today. I fetch from there and not from the river bed, because we will use it for cooking as well.”

Outside her home, Christine Dlabantu is washing blankets in an old bath. She points to a distant clump of poplar trees across the gorge. “It takes me two hours to go fetch one bucket of water at that fountain.”

She has to climb a steep hill carrying the bucket on her head.

Shovel in hand, her father, Don Dlabantu, who is over 80 years old, is busy mixing gravel. “We are adding a room,” he smiles cheerfully. “We only wish we could get electricity, which we have been promised for many years.”

According to Mabece both Eskom and the municipality have failed to make good on “their promises to provide electricity to large parts of Tsitsikama”.

“You know politicians … They have meetings, and then meetings after meetings. The actual execution of council resolutions is another thing,” he says. Mabece serves as a member of the Enoch Mgijima local municipal council as traditional leader. 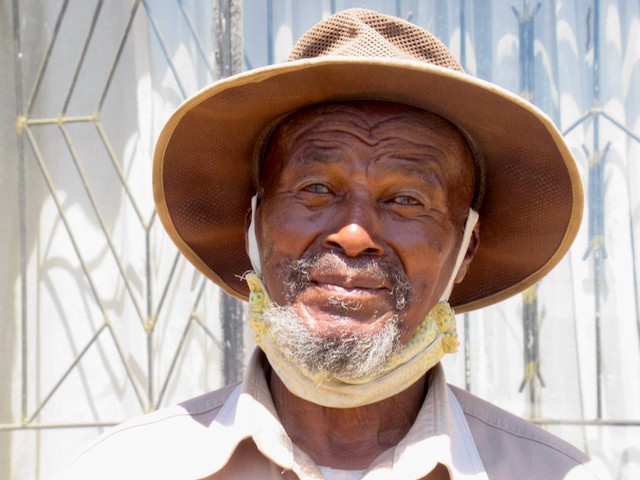 Don Dlabantu grew up in Tsitsikama and he is happy to live there, but says lack of water and electricity makes life hard

Tsitsikama has an active farmers’ association, chaired by Leonard Madikane, a retired police detective. “I returned to my home village to enjoy the tranquillity, and because farming is in my blood,” he says.

“We have one or two weak fountains in the river beds, but animals drink and [defecate] there. Since the municipality fails to maintain pumps, village taps are often dry, forcing villagers to fetch polluted water for cooking and drinking.”

At the entrance of the village, elders gather to inspect the original village borehole, covered with a small stone, under which the water can be seen reaching almost to the top.

“This borehole used to supply the entire village,” says Goodwill Godwana. He points to a rusty stump nearby where a windmill once stood. “This windmill pumped the water to a reservoir that was connected to the system that took water to the village. Things were working then. But a few years ago, the municipality gradually removed all the windmills on working boreholes. They left us with two boreholes at the bottom of the village, which makes no sense, because water has to be pumped uphill instead of using the high-lying boreholes that make use of gravity. The pumps are broken most of the time anyway, and those two boreholes have been over utilised, so they can hardly yield anymore.”

Godwana chairs the local school board. A water tank was supposed to provide the 103 primary school learners with municipal water. “But as you can see, this connecter pipe has never been linked to the system. Until recently, we did not even have water in our rainwater tanks. All this amidst children facing exposure to Covid-19 at school,” says Godwana.

About 100 metres from the nearest classroom, dilapidated brick buildings are all that is left of what used to be ablution blocks. Adjacent are two unstable portable pit toilets, the only facilities available for over 100 learners.

Thirsty sheep mill about an old reservoir with a bone dry drinking crip at its base. “This reservoir is leaking profusely,” says Madikane. “It used to be filled by a windmill, but the municipality removed it. The municipality is also supposed to refill two JoJo’s [tanks] they placed here, weekly, but they haven’t been seen for the past three weeks. We can’t even dip the sheep.”

Tsitsikama’s water services are rendered by the Chris Hani District Municipality in Queenstown. The municipality is currently under investigation by the South African Human Rights Commission for its alleged mismanagement of water and sanitation services to the many Eastern Cape towns and villages falling within its boundaries.

As far as the lack of service to Tsitsikama is concerned, Chris Hani District Municipality spokesperson Thobeka Mqamelo said, “Lower Tsitsikama is one of the areas that is hit by dry conditions as the yield in borehole servicing the area declined intensely. Water carting is done to support the community with drinking water, whilst procurement processes are underway to site for a new water source and drill another borehole.”