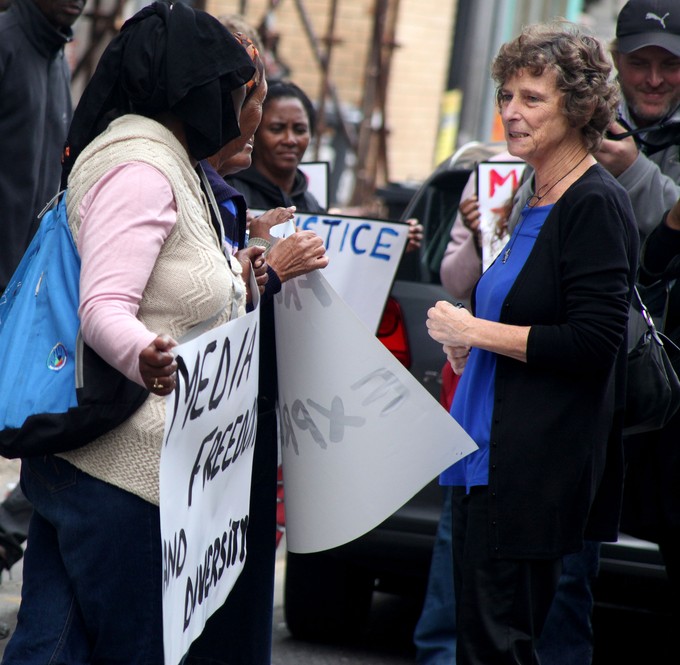 Alide Dasnois chats to Right2Know protesters outside the Labour Court earlier today. Her litigation had the support of Right2Know and the Open Democracy Advice Centre. Photo: Masixole Feni

Alide Dasnois and Independent Newspapers have reached a settlement in the court case brought by Dasnois against the newspaper group. The text of a joint statement by the parties appears at the bottom of this article. In it, Independent withdraws allegations of racism against Dasnois.

For readers who don’t recall the events that led to this case about media freedom and editorial independence, Dasnois was the editor of the Cape Times in December 2013. On the night of 5 December 2013, Nelson Mandela died. On the morning of 6 December the Cape Times ran a wraparound in memory of Mandela. Time magazine in the United States voted the Cape Times coverage as one of the 14 best Mandela front pages in the world.

The inside front page story of the Cape Times ran a story about the Public Protector’s adverse finding on a fishing deal involving Sekunjalo. The article stated that the “public protector found Agriculture, Forestry and Fisheries Minister Tina Joemat-Pettersson guilty of maladministration, improper and unethical conduct in the irregular awarding of an R800-million tender to the Sekunjalo consortium to manage the state’s fishery vessels.” Sekunjalo had recently bought Independent Newspapers which publishes the Cape Times. (See GroundUp’s coverage of this on 8 December 2013.)

Dasnois was effectively fired as Cape Times editor over the phone by Iqbal Surve, the proprietor of Sekunjalo. Surve and/or Independent gave conflicting versions of why Dasnois was fired in the following days, with Surve eventually settling on the argument that running a wraparound in response to Mandela’s death was disrespectful.

A protest in December 2013 held in support of Dasnois and media freedom outside Independent Newspapers was disrupted by supporters of Sekunjalo.

About 15 members of Right2Know came out to protest in support of Dasnois outside the Labour Court in Cape Town earlier today. Organiser Vainola Makan told GroundUp, “Media is not something we have to take for granted. In South Africa there is still a long way to experience media freedom. Bosses of Media houses still are in favour of capitalism and money making. Today has been a victory for the media freedom.”

Here is the text of the joint statement following today’s settlement:

Since the removal of Alide Dasnois as editor of the Cape Times (on 6 December 2013, the day following the death of Nelson Mandela), her rejection of an alternative editorial post and the later termination of her employment, she and Independent Newspapers have been in dispute about these events and the reasons leading to them. Litigation in the Labour Court and the CCMA has been pending about these issues.

The parties have now reached an agreement settling the litigation and all outstanding matters between them and have, amongst other things, agreed the following: