The dangerous trade of the coal hunter

Stealing coal from goods trains to make a living 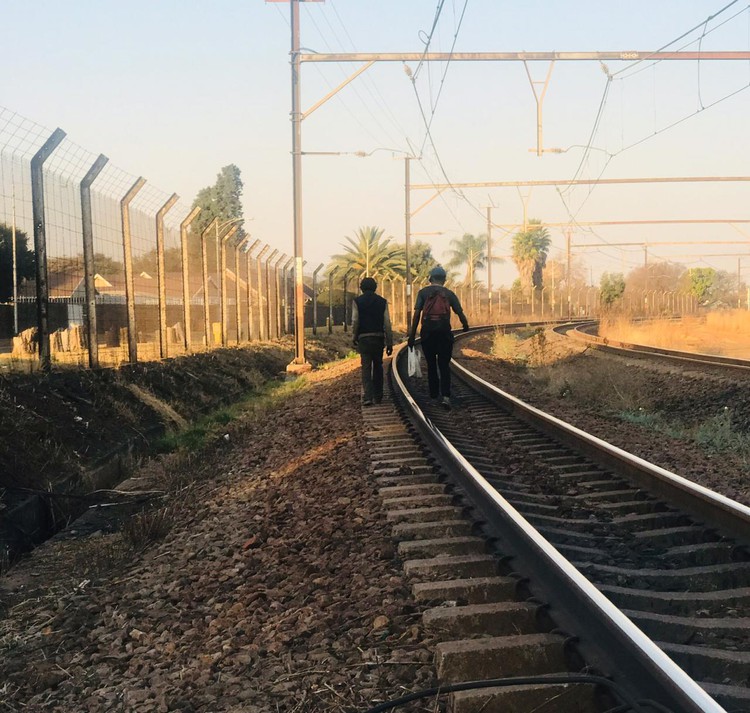 The coal hunters climb onto the goods trains to steal coal which they can use at home or sell to make a living. Photo: Kimberly Mutandiro

Fana* and Thabo* are coal hunters. Every day they climb onto the goods trains transporting coal along the Brakpan-Springs route to fill up their sacks with stolen coal.

They risk a fall from the train or an arrest by the security guards who patrol the railway line. But they say they have little choice.

Some of the coal they take home to their families, some they sell in townships and informal settlements.

The two friends know the exact train time schedule and prefer working during the night, or in the late afternoon after the security guards who patrol the railway lines during the day have gone home. They used to climb onto the trains during the day, but of late railway security has tightened.

They can fill up to five or six sacks bags each during a night, they say.

GroundUp watched Fana and Thabo climbing into a goods train that had just stopped. After collecting coal they threw the bags out on the other side of the train and jumped off after the bags. Before long the two were halfway up a bridge on their way to hide the coal. By the time they came back to the railway, the train had moved on and they could wait for the next.

At about 5:45pm Fana and Thabo started walking slowly on the side of the railway lines along the Springs-Brakpan route. One of them carried a backpack with a few empty sacks in it. Their clothes and faces were dirty from black coal dust. They picked up bits and pieces of coal which had fallen off from goods trains. They use the coal to light a fire during the night as they wait for goods trains to pass.

“It is a risky job but we have no choice,” says Fana. “We give some of the coal to our mothers at home. We sell the rest for R50 a bag, but the price is up for negotiation.”

“The coal l take home is very helpful because electricity is expensive; we can only afford to buy R50 per month. My mother cooks with a coal stove throughout the month to save us from buying more electricity.”

Fana lives in Reedsville in Springs, not far from the railway line, while Thabo lives at Mkhandla informal settlement in nearby Brakpan. The two meet at a spot near the railway line everyday to do their goods train routine.

Fana, who lives with his unemployed mother and two siblings, says he went to school up to grade 10. “It’s not easy to be raised by a single mother. I had to drop out of school to help her the best way I can.” Sometimes he gets gardening jobs. When he’s not working, he comes to the railway line.

Thabo lives with his elderly grandmother and younger brother. He says his grandmother is always thankful when he brings some coal home. Though he managed to finish matric, he has not been able to find work. Both say they use the money they get from selling coal to help buy food at home.

They use wheelbarrows to carry their bags of coal home during the night at about 10pm. During the day they sell the coal.

Other “coal hunters” seize the coal to fuel a nyaope addiction, like 19-year-old Themba* who sleeps under a train bridge. He says he can fill up to six bags in one night.

“I am hooked onto nyaope. I do whatever I can to get money.” He has been hooked since he was in high school and ended up dropping out. He takes some coal home to his family in Kwathema and sells the rest. He says he makes up to R250 a day.

Themba says he once fell from a train and broke a leg. But when it healed he went onto the trains again.

He says his mother is a domestic worker and does not earn much. “The least I can do is give her some of the coal so she can use it for cooking,” he says.

*Not their real names