DA calls for army to be deployed 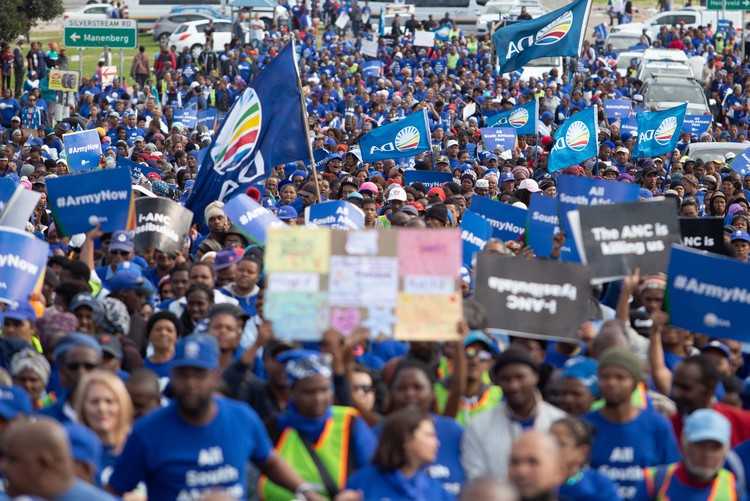 About a thousand people joined a DA march from Manenberg to Nyanga to call for the army to be deployed in Cape Town’s crime hotspots. Photo: Ashraf Hendricks

Democratic Alliance leader Mmusi Maimane led over a thousand people on a march through Cape Town townships on Thursday. They urged the national government to deploy the army in crime-ridden communities.

Dubbed the #SendTheArmyNow protest, they walked from Manenberg Police Station to Nyanga Police Station. Last year former Minister of Police, Fikile Mbalula said that the army would be deployed in high-crime areas by Christmas. This did not happen.

Nyanga precinct has the highest murder rate in South Africa. Residents who spoke at the event talked about living in constant fear of gangs, drug dealers and gang-related shootouts.

Khayelitsha resident Nomboniso Mandlana participated in the march. She said she is forced to stay indoors out of fear of crime. She believes if the army is deployed it will make communities safer. “We stay inside our houses because we fear the criminals roaming in the streets.”

Maimane said the DA is calling for the army to assist the police to get rid of crime, because the police stations in the Western Cape are under-resourced. Addressing the crowd, he said, “We in South Africa, where our women are being raped, men are being killed, and young people are taking drugs, are saying enough is enough.” He added, “We are here standing saying one thing: the police can’t cope. We need the army now!”

According to another reporter at the march, Deputy Police Minister Bongani Mkongi refused to accept the memorandum because the march leaders refused to let him address the crowd. GroundUp has been unable to confirm this.