Interview with Shaeera Kalla of #FeesMustFall 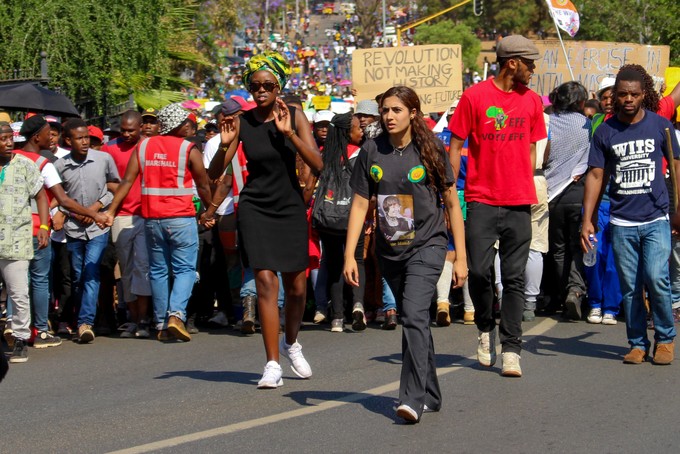 Shaeera Kalla (in black pants and T-shirt) at the Fees Must Fall protest, Union Buildings, October 2015. Next to her is the current SRC president, Nompendulo Mkatshwa. Photo: Samantha Camara (https://samcamara.wordpress.com/)

GroundUp: You played an important leadership role in the #FeesMustFall protests last year as Wits SRC president. What do you envision your role will be this year?

Kalla: My role has fundamentally changed from last year. As an elected student leader I had a mandate to both set the ball into motion and dribble it along the field to win our various battles.

This year, I must give current student leaders the space to lead us. I can only advise and set the ball in motion. It is no longer my role to do the dribbling. You will find me with other students on the front of the picket lines, standing up for injustices on our campus and beyond our borders.

The upskilling and training of our youth as we move towards a knowledge based economy is critical to our collective success as a country, and in as much as this is a student led struggle it represents something so much bigger.

GroundUp: The calls for fees to fall and for outsourced workers to be insourced have financial implications for universities. The tensions arising from this are becoming evident. For example at UCT support staff salary increases were revised and consequently the Employees Union declared a dispute. How do you envisage universities being sufficiently funded to meet these demands?

Kalla: Universities need to become more efficient in terms of how they use their resources. Universities are not transparent and do not use funds efficiently. Before the #FeesMustFall protests we were in fee discussions with the university and they could not even provide us with a detailed itemized account of the university spending.

Government is undoubtedly underfunding higher education. In South Africa, 0.8% of our GDP is used on higher education. This is pathetically embarrassing as the international average is around 2.5% of GDP. The increased dependence on fees from students is the reason for the commodification of our universities, which function as businesses where poor students are seen only as liabilities.

“You are either too rich for NSFAS, too poor to pay your own fees and too black for a bank loan.”

NSFAS is not free and quality education. The system itself needs to be radically restructured as it is currently failing. The country needs a viable model for the funding of poor students, and universities themselves need to cater for African needs in order to create an empowering and enabling environment unlike the current university model which is both anti-poor and anti-black. Nothing is ever free, but there is a way to fund education without shutting out masses of students. The current reality is that you are either too rich for NSFAS, too poor to pay your own fees and too black for a bank loan.

We should consider tapping into SETAs money to fund free and quality education for the poor. To achieve free education we need our government to pick up the political will, but corporates who benefit from trillions of illicit financial flows need to also be contributing to the upliftment of young people.

GroundUp: Some people, such as Nico Cloete of CHET have called for differentiated fees. This means students with high-income earning parents should not only pay fees, but pay more than they do now, while students from poor homes should not have to pay fees at all. What are your views on this?

Kalla: Before I engage on Nico’s proposal let me first point out the meagre efforts by CHET who have been in a position of power to create change in the higher education space but have not confronted the structural failures in our education system.

But my response to Nico on his proposal would be this: The South African Institute for Race Relations did a study that shows that only 5% of South African households can actually comfortably afford university fees. We do not want universities to remain exorbitantly expensive as that furthers the commodification of education and creates what we now see around the world: huge student debt bubbles.

In an ideal world no one should have to pay for education because it is a public good. However, we do not live in an ideal world and we understand that in the neoliberal world we live in, nothing is ever free. We want South Africa to treat education as an investment in society. This means that those who can afford to pay should pay. But if we follow Nico’s proposal, how do we avoid the situation of education merely being sold to the highest bidder?

There must be a functioning funding model that does not keep universities wholly dependent on fees. This means that there must be a funding structure that ensures universities do not collapse or deteriorate in quality even if the majority of students attending them are poor and cannot afford to pay their own fees, which is the case in South Africa.

Five percent of the population simply cannot cross subsidize for 95%, and there is enough money which can be channeled adequately to systemically address the education crisis we are in, however there is a lack of political will.

GroundUp: A criticism of the #FeesMustFall movement is that there are no clear individual leaders, that because it follows principles of collective leadership, there are no identified people who take accountability for the movement’s activities. By contrast, if Cosatu or one of its trade unions, or an activist movement like Equal Education undertakes something, there are ultimately elected leaders who have to account for their activities. Could you comment on this?

Kall: When I was president of the [Wits] SRC, I was accountable, but accountable to students as it is from them that I derive my mandate. The Fees Must Fall Movement is a mass student led movement. This is the first time post democracy that students were united across political divides and it showed the world that the power of a mobilized youth can shake the core of an unjust system. Student representatives are abused within university structures and this is why we made the decision to shut down the university, to symbolically show our frustration at the system that systematically excludes the poor.

GroundUp: It has been said that you coined the term #FeesMustFall. Is this true?

Kalla: If we look at the origins of the Fees Must Fall protests there were many social media posts that I made from the Wits SRC account in preparation and mobilization for the protest (which was advertised) and the shutdown (which was not advertised to protect the element of surprise).

In our 1 Million 1 Month campaign earlier this year, we focused on how being intelligent is not good enough if you are poor. Once we started to tweet about the fees protest in October, we used a number of hashtags, but the one students responded to most was WitsFeesMustFall, which also built on the RhodesMustFall hashtag, and once other universities joined in on the shutdown it became just “FeesMustFall”.

GroundUp: Why do you believe that the Wits SRC has taken what is often a very defiant stance towards their own university, compared to universities such as UWC, where the SRC has been lambasted by the protesters for failing to represent their views?

Kalla: An SRC’s existence must be guided by the premise that it is the bargaining power of students on campus and that we are members of society first before we are students. We can never see ourselves as part of the university system. The Progressive Youth Alliance has had a majority on the SRC at Wits for the past six years, including my successors this year. The PYA is an outright working class biased organisation and as such as an SRC we have always challenged management for anti progressive and conservative stances on political, academic, social economic issues. Universities must, after all, be microcosms of society. I cannot comment on other universities and the position of the SRC therein.

GroundUp: PYA recently called for student protests to stop, which has been criticised by some universities’ SRCs. What is your response to PYA’s call?

Kalla: The PYA has been calling for free and quality higher education since its formation. For the PYA leadership to now say otherwise is defying its own resolutions and members wishes. Calling the Fees Must Fall an act of treason and other ridiculous smears is a smokescreen for the highest ill discipline as a result of self interest and personal political ambition that has reared its ugly head in the student movement.

GroundUp: #WitsFeesMustFall often appears to oppose the Wits SRC. Why do you believe they were formed in the first place?

Kalla: The movement itself in its embryonic stages did not have a national leadership because it was led by students and by the collective on each respective university. The idea of direct democracy within the movement was something we as the Wits SRC used to ensure that every student had a voice and means through which they could express their anger and frustration at the system, at the lily white councils that govern our universities, at regressive and conservative management and VCs who are detached from the reality of the black child, at curriculums which are Eurocentric, but most important, to express anger towards a system that is anti-black and anti-poor, a system that sees commodification of education as a rational way of operating.

The Wits SRC last year took a strategic decision to hold mass assemblies where we took decisions and this is what helped maintain legitimacy as it gave students a place to air their views, and they knew we would take them seriously.

I cannot speak for other universities. However, at Wits we held legitimacy of power at the beginning as the shutdown and the protest itself was conceptualized, planned, mobilized by the Wits SRC. This was not the case for other universities, and in fact what we saw in many cases was students rejecting their elected representatives. After what happened at the Union Buildings, many individual organisations have tried to claim the successes of students for their own political gain and this is no different for those who claim to be “Wits Fees Must Fall”.

The fact of the matter is that there is no Wits SRC without Wits Fees Must Fall and there is no Wits Fees Must Fall without the Wits SRC. No one organization can claim ownership over this struggle, and it was always a non-partisan struggle. There will be many who say that this movement belongs to them, but I fundamentally believe that this movement belongs to everyone and no one at the same time. That is the beauty of a mass movement and is what allowed Fees Must Fall to develop into the biggest student protest since democracy.