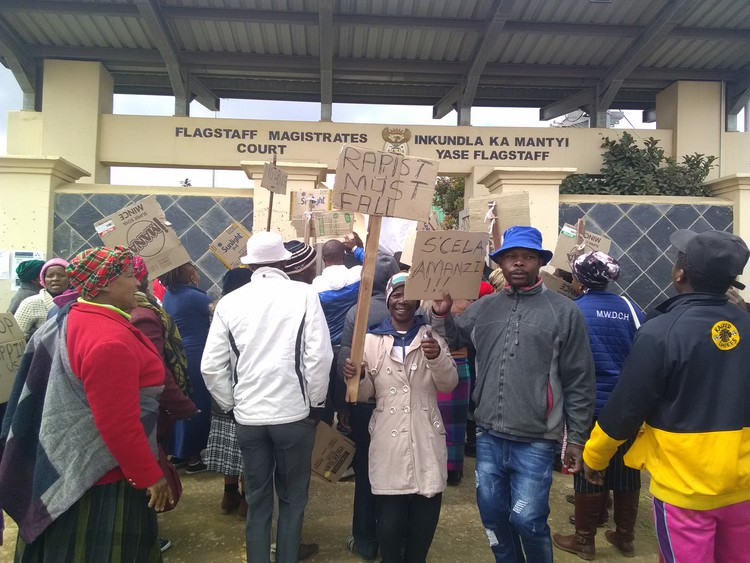 Flagstaff residents marched on the magistrates court on Wednesday with a list of demands. Photo: Sibahle Siqathule

Residents of Mtwaku location in Flagstaff, Eastern Cape, marched on the magistrate’s courts, the police station and the municipal offices on Wednesday, demanding better policing, tougher action against rapists and other criminals and better living conditions.

The marchers first stopped at the Flagstaff magistrate’s court where prosecutor Thandolwethu Tutu accepted a memorandum.

They demanded that those accused of rape should not be given bail without the knowledge of the survivor and the community. They also demanded harsher sentences for those who abuse the elderly.

The marchers went on to the Ingquza Hill local municipality offices where they handed a memorandum to councillor Bambezakhe Goya demanding, among other things, proper water and sanitation, roads, streetlights, housing, sports fields and job opportunities for the youth.

The last stop of the march was at the police station where the marchers demanded quicker responses from police when they are called, higher visibility of officers in the neighborhood, and more sensitivity from officers especially in handling rape cases.

One resident said her child had been raped by the child’s uncle in September. She said she had been met with “rudeness and insensitivity from police officers” when she reported the case. The accused had been given bail.

“I was not even informed that he was being given bail. I just saw him walking around the neighborhood as a free man. We live in fear of him because he has every opportunity to harm my child and me for opening a case against him.” She said.

“We are living in fear of criminals who rule this village. This march for peace is an attempt to trigger action from local authorities before we take matters into their own hands.”

Police captain Nozuko Nyamazana who accepted the memorandum said police would not comment at this stage. “However, we will be giving feedback to the community within 15 days.”