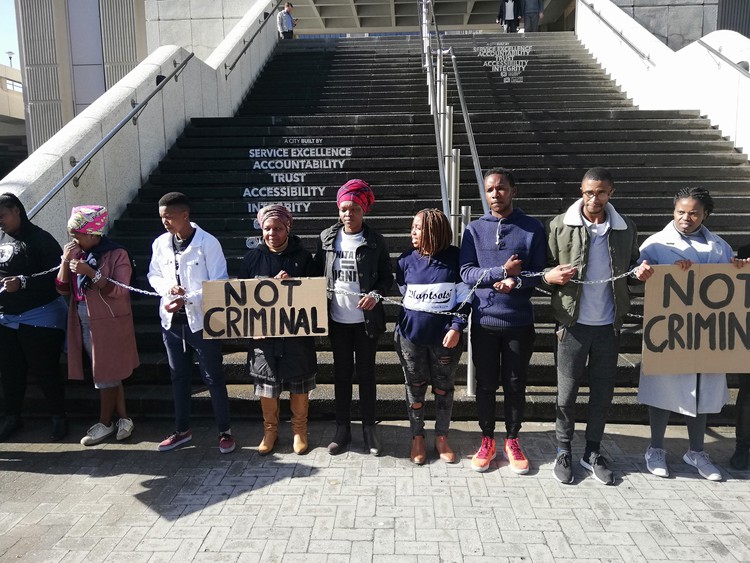 Activists protested against the Regulation of Gatherings Act by chaining themselves to the Cape Town civic centre in August. Photo: Thembela Ntongana

In order to stifle protest action officials tend to “manipulate or abuse the criminal justice system to intimidate or unfairly punish protesters”, a report compiled by various civil society organisations on protests in South Africa has found.

The first annual State of Protest Report was launched at the Public Interest Law Gathering held at the University of Witwatersrand on Wednesday morning. The report looks at protests across South Africa between October 2016 and September 2017 and uses this data to highlight trends that stifle protest action.

The report comes after civil society organisations argued at the Constitutional Court that failure to provide notice for a protest should not be a criminal offence. The legal battle began after activists from the Social Justice Coalition (SJC) chained themselves to the railings of the Civic Centre in Cape Town as an act of civil disobedience in 2015. They were fighting for better sanitation in Khayelitsha. Ten elected leaders, known as the SJC10, were identified as the convenors of the protest and were convicted for failing to provide notice. The case is awaiting judgement.

The report said protests are stifled by the misapplication of the Regulations of Gatherings Act 205 of 1993 by local municipalities. Added to this was police brutality, intimidation, arrests and court interdicts.

Speaking at the launch, Bongani Xezwi, the Outreach Organiser for Right2Know, said the Act is often applied irregularly depending on who is protesting. “Right2Know has marched to the Union Buildings before without serving notices and no one was arrested, but if a community or students, who don’t have access to legal resources, march to the Union Buildings they are arrested on charges of public violence,” said Xezwi.

Stanley Malematja of Centre for Applied Legal Studies said in some municipalities officials use “bylaws”, which are rules set by the local authorities, to stifle protest action.

The report said some of these bylaws range from paying a fee to protest to not allowing a protest if the entity being protested against does not agree to accept the memorandum.

Xezwi said the criminalisation of the convenor of a protest was another way to deter people from protesting. “People end up being scared to put their names down as convenors of the protest when they have to give notice because if arrests happen, they will be targeted and end up with criminal records,” he said.

He said court interdicts were the most effective tool used by private companies and local municipalities to stop protests because communities do not have the resources to challenge them in court.

The report found that the most common charge against the convenors was public violence, even if the protest was peaceful. According to the report, “the aim is to keep protesters behind bars for as long as possible to intimidate and frustrate them and let their causes lose momentum”.

It also said the “heavy handed police conduct” at protests was often noted as an escalation for conflict in protest situations which were later characterised as violent by the officials and the media.