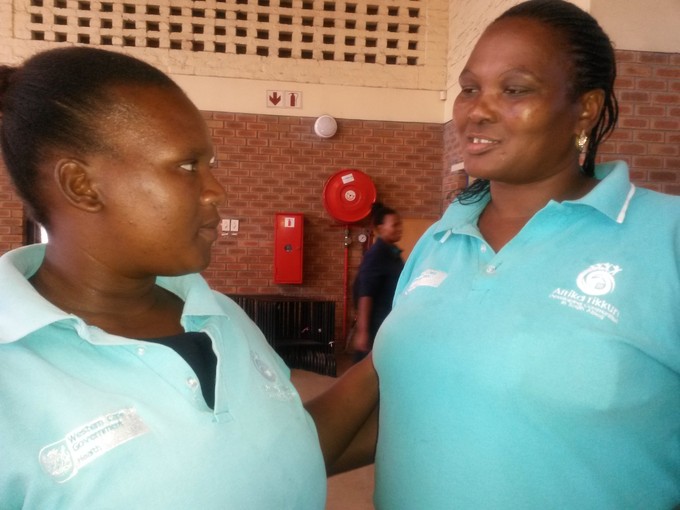 Community health care workers Akhona Nonathle and Nomsebenzilo Nonbewu are part of a group who will be retrenched when Afrika Tikkun leaves the Delft area. Photo: Barbara Maregele

As a result of an increase in criminal activity in Delft, Afrika Tikkun is to withdraw its services from the area. About 120 community healthcare workers will be retrenched at the end of March.

The workers are women, mostly single mothers. They earn R1,900 a month and are employed on an annual contract to provide home-based care and community support services to hundred of patients in the area. The organisation runs the same program in Mfuleni and Eerste River.

Over the past few months, the organisation says, several complaints were received about break-ins at its centre in Delft and workers being held-up at gunpoint, and of the rape of caseworkers.

The Western Cape Department of Health is to ask other organisations to submit applications to provide these services in Delft.

On 23 February, the workers were informed that Afrika Tikkun would no longer work in Delft, leaving most of them without a job.

“We were told bluntly by COO Leonie van Tonder that they are not renewing our contracts. We will be retrenched from 31 March. Most of the people in our group are single parents who have to earn a living to support their children who are still at school,” says health worker Francis Cordon. She has been working for the organisation for 13 years.

Another worker, Nomsebenzilo Nonbewu, says if they had been told sooner, most people would have been able to secure alternative work.

“People would have looked for work and maybe it wouldn’t be this bad. It’s unfair. They didn’t think about us at all when they made this decision,” she says.

“Afrika Tikkun also employed an additional 20 workers about three weeks ago. Why would they get more people if they knew they wouldn’t renew the tender? Must they go looking for work all over again?” she says.

Nonbewu said the workers were also worried about what would happen to their patients when their contract ended.

“Our clients are also worried because they are used to us, especially the people who are bedridden and others who need their bandages changed regularly. Who will do this when we aren’t there?” she says.

“Even if we do work in a high risk zone, we manage to do our work.”

Afrika Tikkun spokesperson Catherine van Schoor said that workers had been aware their contracts would end on 1 April.

“Once the new organisation is appointed, the care workers will have an opportunity to reapply for the work. They stand a very good chance of being appointed.” she said. She said even if the contract had been renewed the workers would have had to re-apply.

In a statement, CEO Marc Lubner said that the decision had been made at the end of last year due to an increase in crime. “The escalating crime problem at the Nelson Mandela Peace Park and the growing insecurity on access to the centre, has warranted us having to make a decision to protect the lives of our staff.

“Armed hold ups are not uncommon and we have reported cases of rape of caseworkers. During 2015, we were forced to close the computer lab and training centre due to break-ins. Our vegetable gardens were also raided constantly. We also lost produce and equipment,” he says.

Lubner says only part of the staff could be moved to their centre in Mfuleni.

Western Cape Department of Health spokesman Sithembiso Magubane said the Department would appoint a new organisation to work in Delft by April.