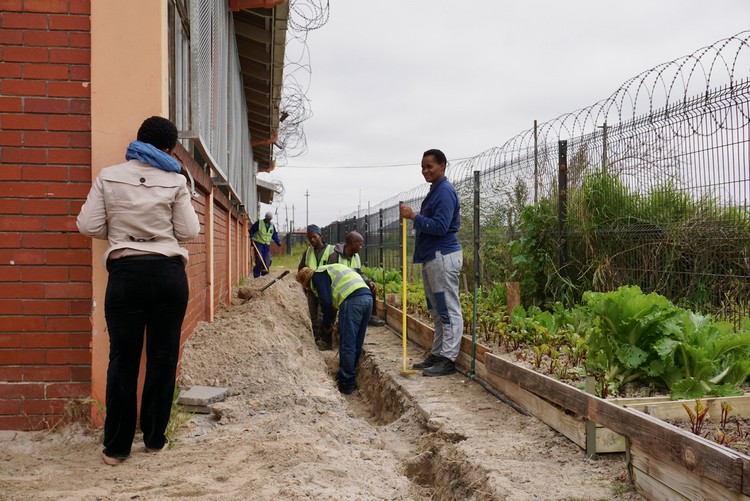 A school in Khayelitsha hopes to cut its water bill by R50,000 a month by implementing a sustainable water circulation system.

The initiative, started in June, falls under the wider scope of Lukhanyo Hub, a project of the Resilient Civic Design Collective (RCDC) which uses unused land surrounding Intlanganiso Secondary School in Khayelitsha to create a healthier environment for students.

The school has more than 1,400 learners. Its monthly water bill is almost R60,000, but the school only has a water budget of R10,000, according to the school principal Khaya Tshemese. The high water bills are mainly due to leaking pipes, high usage, and inefficient systems, according to RCDC director Ben Mansfield. The finished project should eventually help the school stay within budget.

Future plans for Lukhanyo Hub include the construction of shaded seating areas and a new building for changing rooms. The roof of the building will provide solar power for the school and also act as a rainwater collection system.

RCDC managing director Byron Hanslo said the goal is to develop infrastructure that can perform more than one function.

“We want to push all the boundaries on how we can best use this space, but always come back to how we can benefit the school and its students,” Hanslo said.

In 2017, Lukhanyo Hub completed an outdoor AstroTurf sports facility that is now being used by students, and is also open to the community after school hours.

It is necessary to “incrementally introduce new systems to ensure ownership and to enable feedback so that the bigger system is designed appropriately”, said Mansfield.

In 2015, RCDC set up a small urban farm on unused land at the school. Under manager Jeremy Jones, the urban farm provides educational and training opportunities for learners as well as other community members. It does not use the school’s water supply.

Some of the produce is used by the school and some is sold at a community market.

“If I can have children in grade four come and work with me in the garden, then I can train them to run a business in urban agriculture in the future,” said Jones.

The plan is to establish urban farms in more schools in Khayelitsha. Jones has already secured a lease for an urban farm at Zola Senior Secondary School, which has a focus on business skills development, but funding is needed.