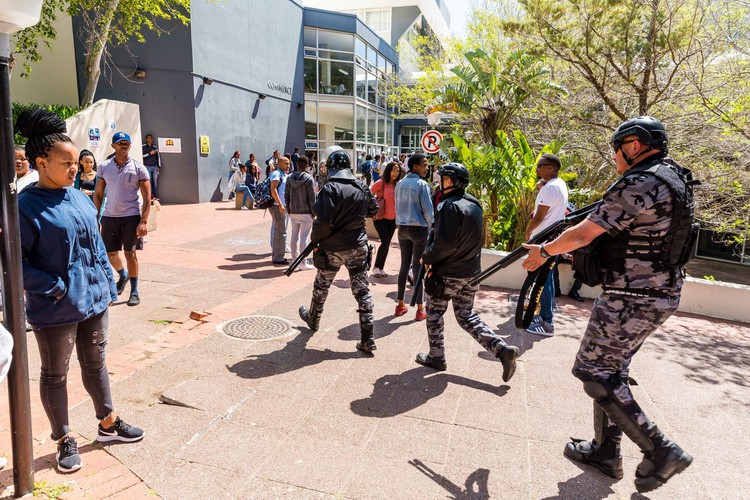 Cape Peninsula University of Technology students protested against financial exclusions on Thursday. About 200 people participated in the protests at the Cape Town campus. Some protesters tried to disrupt classes which prompted police to disperse them using rubber bullets. This came a day after Vice-Chancellor Prins Nevhutalu resigned, following a disciplinary hearing that found him guilty of “gross misconduct”.

Some of the protesting students told GroundUp that they received a notice ordering them to pay their debt, failing which they would not be able to register next year.

Following the protest, students returned to class. Security from the firm Vetus Schola watched and protected entrances to the campus buildings. The firm has been on campus for over two months. “They are provoking us everyday,” said protester Wanana Siyanda. “If one of us responds, it will prove the need for their presence, but we dont want them anymore here!”

Protests have been ongoing on CPUT for months over fees, accommodation, workers’ issues, and the suspension of four students. (See recent GroundUp reports.) Last week St Mark’s Anglican Church in District Six, renowned for its anti-apartheid activities, was petrol bombed, allegedly by a student protester.

Protests are expected to continue on Friday. Some protesters told Groundup that they won’t stop until CPUT management meets them and acknowledges their demands on financial exclusion.