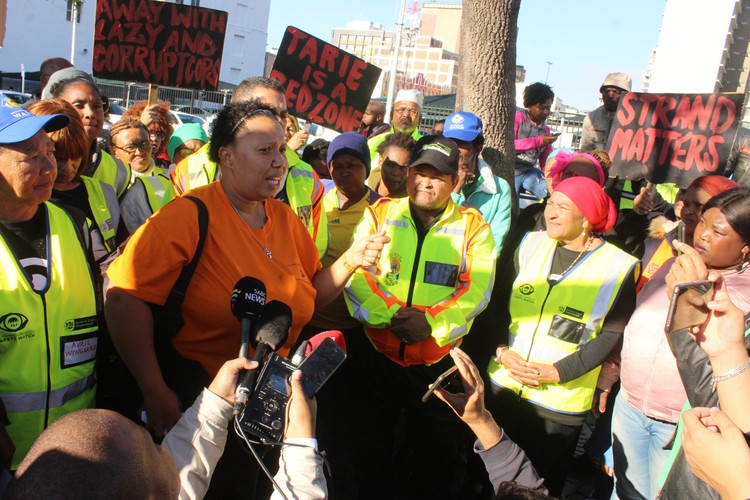 Mitchells Plain Community Policing Forum chairperson, Lucinder Evans (centre in orange), says children were confined to their homes during the recent school holidays because of gang violence in the area. Photo: Velani Ludidi

“We demand that a state of emergency is declared in gang-infested areas,” said Fransina Lukas, chairperson of the Western Cape Community Policing Forum (CPF) board.

On Thursday, Lukas joined over a dozen members of CPFs and neighbourhood watches from across Cape Town to picket outside Parliament ahead of Police Minister Bheki Cele’s budget vote speech.

Hours after the picket, Cele announced that the SANDF would be deployed to support policing in Cape Flats precincts with soaring murder rates and incidents of gang violence.

“All we want is for the government to work with us and include us when making decisions about our communities,” said Lukas. She said the picket was to highlight growing concerns about crime in the province ahead of a crime summit expected to take place in Paarl over the weekend.

Among their demands was for the deployment of additional resources to stabilise gang-ridden areas. The group also said that interventions by all three spheres of government was needed to resolve the problem.

“We demand special courts for gangsters and that there is no bail for people arrested for gang-related activities,” said Lukas. She also called for job creation projects and social development in crime hotspots.

Lucinder Evans, Mitchells Plain CPF cluster chairperson, said children were confined to their homes during the recent school holidays because of shootings in the area. “The municipality must invest in townships not just in rich areas. We want to see cooperation between the Metro police and the South African Police,” she said.

Shanaaz Sullie from Strand said, “We are prisoners in our own homes because of the gangs. No one is safe. All we are asking from the minister and others is that they help us fight this.”

Before dispersing, the group stood in a circle and said a prayer. “God must give us direction now. He [Cele] has been silent and our children are dying like flies,” said CFP member, Dumsani Mziki.

Alvin Rapea, Chief Secretary for Police, accepted the CPFs’ memorandum and promised to deliver it to Cele. Alluding to Cele’s annoucement on the deployment of the army, Rapea told picketers, “Expect a positive response because he has been listening.”