Covid-19: Here’s what occupations in Cape Town are doing in response to the pandemic

Woodstock Hospital is well prepared, but occupiers at Central Methodist Church and Helen Bowden Nurses Home are at great risk 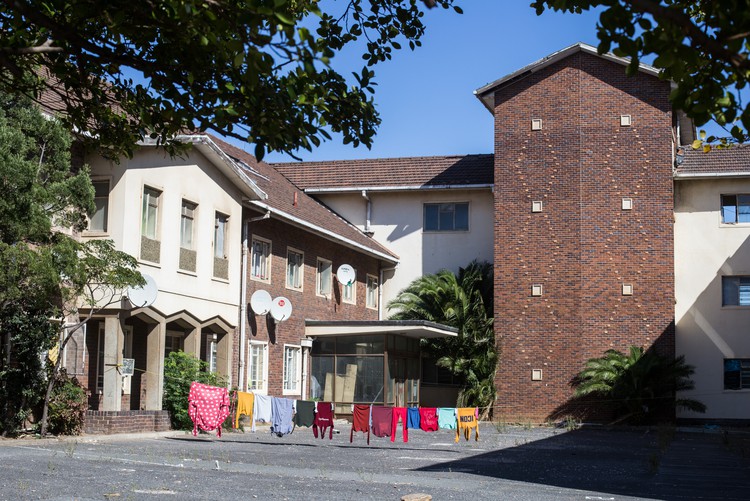 As South Africa adapts to a world under the shadow of Covid-19, the residents occupying Woodstock Hospital, which they have renamed Cissie Gool House, have instituted pandemic protocols to reduce the risk of infection among the occupiers.

The facility is now home to about 1,000 people, most of whom were displaced from their homes in the inner city due to the rising cost of housing. Many children and elderly people are residents.

Bevil Lucas, a member of the occupation and a leader of housing activist group Reclaim The City, says that following a meeting on Monday, the occupation leadership decided to implement stringent preventative measures to limit the risk of the virus spreading among residents. The leadership has also begun to educate the residents about Covid-19, and has instituted compulsory hygiene practices with the resources at its disposal.

Lucas says the pandemic presents a challenge, as the facility has always relied on mass meetings in the main hall. Communication has now moved to WhatsApp and smaller section meetings, and printed media distributed around the property.

“It is about getting people used to washing their hands constantly, participating in discussions, and using preventative measures in rooms and in the sections where they live,” said Lucas.

He said that fortunately they have been able to communicate with health professionals who have guided their prevention strategy.

The measures at the house include:

Residents have been instructed that anyone exhibiting flu-like symptoms should isolate themselves in their rooms and contact the Covid-19 helpline. The Western Cape Health Department will determine when hospitalisation is necessary. If a case of Covid-19 is detected, the occupiers will re-evaluate their measures.

The occupation leadership has put out a special appeal for food and hygiene products, particularly for its elderly residents.

Meanwhile preparations have not been as thorough at a sister occupation at the former Helen Bowden Nurses Home, now popularly referred to as Ahmed Kathrada House (AKH), near Sea Point.

Angela Adonisi, a registered nurse and occupier at the facility says that the leadership had met to discuss the issue on Monday evening. There are now pamphlets and posters explaining how to prevent the spread of Covid-19 posted at the occupation.

However, Adonisi reported that the seriousness of the virus wasn’t yet appreciated, and that there weren’t yet any special measures. She hoped that the Woodstock protocols could be replicated at their facility.

There has been no word from the City’s health directorate on what measures it will take regarding the refugee protestors occupying the Central Methodist Mission, nor for those who have been moved from Greenmarket Square to an area near the Cape Town central police station.

Papy Sukami, a leader of the group still living outside Caledon Square Police Station, which numbers well over 100 people, said that no government health officials have contacted them.

Sukami said his group was offered space in a shelter by the City, but they had turned it down. He said that he expected the City to enforce its bylaws soon, following a court ruling by Judge Thulare on Tuesday that finalised an interim order against the group.

Aline Bukuru, leader of the group occupying the Methodist church, could not be reached for comment.

Western Cape Minister for Health Nomafrench Mbombo said that her department’s priority right now were public spaces such as hospital waiting rooms, which often contained more than 100 people. The provincial minister shared a comment from the City which said that the “national government will need to enforce their decision and disaster declaration” as it pertains to the Central Methodist Mission.

Mayco Member for Community Services and Health Councillor Zahid Badroodien said: “City Health has conducted a number of assessments in terms of conditions at the church and determined that the venue is not suited for human habitation – particularly given the number of persons occupying the space. This was communicated to both the building owner, as well as the group inside the church. A notice was served on the owners of the venue to address the non-compliance with the Environmental Health By-law of the City. It is our understanding that the group has been asked on numerous occasions to vacate the building, but have refused to do so.”

In a press release on Wednesday, Reverend Alan Storey of the Central Methodist Mission said that the church had written to and met with the refugees living their to appeal to them to leave. The refugees are refusing. Signs have been put up to say that no outside visitors are allowed inside the church.

Storey said the church is proceeding with its legal processes. “The conditions inside the sanctuary are ripe for a virus of any sort to spread, let alone the highly contagious coronavirus,” he said.

A few minor corrections were made to this article after publication including the estimate of the number of people staying at Woodstock Hospital.