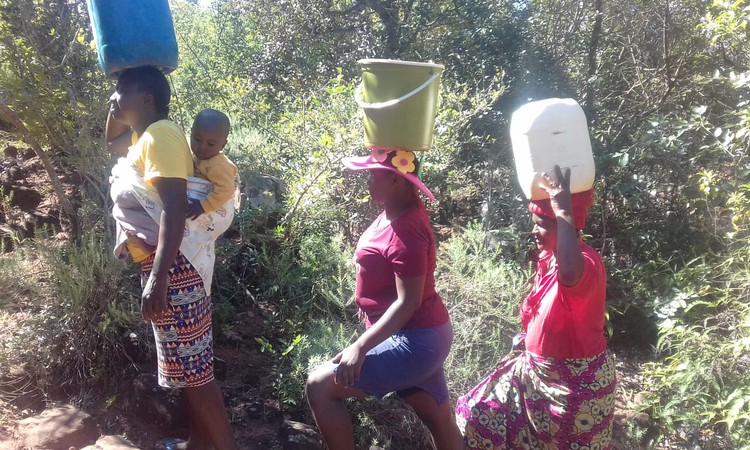 Residents of Ha-Mabila Village say they walk five kilometres to collect water at the nearest river. They say the municipality has not sent water tanks to their village in three weeks. Photo: Supplied

Residents of Ha-Mabila Village, which falls under the Vhembe district municipality, say they walk at least ten kilometres to and from the nearest river to collect water every day.

“We need water every day and there is no way we can follow the lockdown regulations without water. We are forced to go out and share this source with animals. The water may be contaminated,” says resident Solomon Matshidze.

He is one of nearly 100 households in the village who rely on the river as their main water source. This is despite the roll out of a project in 2017 by Florence Radzilani, who was mayor of Vhembe at the time, to supply villages with water tanks and to drill boreholes.

The project came to an abrupt halt when the lockdown regulations were implemented, says Ralushai Matodzi from Vhembe District Municipality. Matodzi acknowledges that Ha-Mabila village is experiencing water shortages. “This is due to the village borehole that dried up and the district has drilled another one which is complete but waiting for the electrification process. The contractor who drilled the borehole left due to Covid-19 lockdown,” he said.

But according to community leader Mashudu Maduguma, Ha-Mabila village has been without a clean water source for almost ten years. She says the water tanks last visited the village three weeks ago on 23 April.

Maduguma confirmed that a borehole had been drilled last year but that it was not operational.

“We have to fight with the municipality to deliver water to the village. This leaves villagers with no option but to fetch water from a river almost five kilometres away,” says Maduguma.

Another resident, Israel Negondeni, says, “We feel this is very unbecoming of the municipality. There are elderly people who cannot carry buckets of water on their heads for such a distance, and at the same time cannot afford to hire anyone to fetch water for them. Really the community is struggling.”