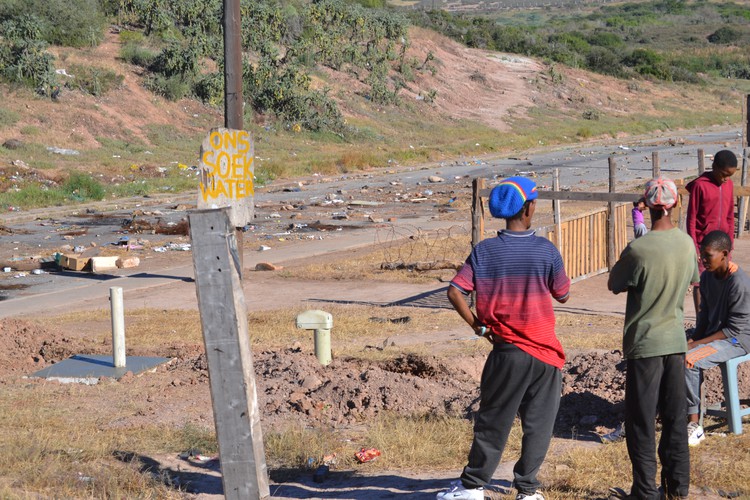 Residents of a 14-shack informal settlement in ward 48 in Uitenhage received a cement standpipe with clean running water after protesting for services three weeks ago. Thamsanqa Mbovane

Three weeks after residents of a 14-shack informal settlement in ward 48, Uitenhage, have at last received clean water by tap.

This comes three weeks after the shack dwellers protested and used prickly pears, car tyres and anything they could find to obstruct Doornhoek Street on the border of their settlement on 8 April. They had no toilets, electricity or water on the land they occupied a year ago.

On Thursday afternoon, a team of municipal workers arrived and installed a standpipe. While residents welcomed the installation of water, they still need toilets.

Resident Ettienne Malgas said, “We are happy that finally they came to their senses. We will clean the street only when we see concrete toilets built for us. Doornhoek will remain a no-go street. We threw litter because this is the only road motorists use and it has no speed bumps.”

He visited the area on Wednesday and told GroundUp that shack dwellers were unable to wash their hands and adhere to the Covid-19 regulations without water.

“The cleaning of hands was problematic. I contacted municipal officials and they investigated the complaint. Residents in the area only got water from trucks and this was a challenge because the trucks did not arrive all the time,” he said.

Grootboom said that after hearing that some residents had been eating rotten food during the lockdown, he donated 1,000 food parcels to various areas in the metro including ward 48.