Covid-19: Strandfontein site for homeless to be closed, says councillor

Email reveals plan to close it on Thursday 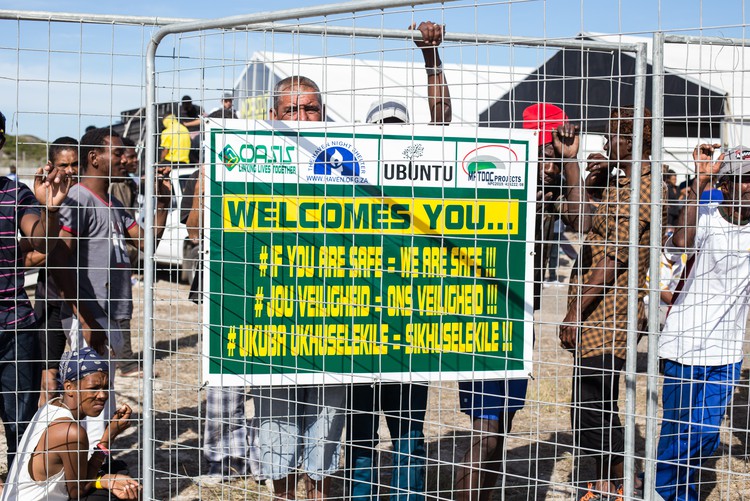 Strandfontein site for homeless to be closed from Friday. Archive photo: Ashraf Hendricks

The relocation camp housing homeless people at the Strandfontein Sports Ground in Mitchells Plain could be closing down as the country enters lockdown level 4 on Friday.

This was revealed in an email, seen by GroundUp, sent by Dr Zahid Badroodien, Member of the Mayoral Committee for Community Services and Health, to other councillors in the City of Cape Town.

In the email dated 23 April, Badroodien stated that following interactions the South African Local Government Association (SALGA) had with the national Department of Social Development and a legal opinion, the Mayoral Committee had decided that “Strandfontein will close on 30 April 2020”, and that by “mid-May all individuals will return to established shelters if they choose or to where they’ve come from if they choose”.

Badroodien said that the City had been advised that it is “not responsible for the provision of housing/shelters to homeless people during the lockdown, other than to collaborate with the cabinet minister and make resources available within the City’s financial means”.

He suggested that homeless people could either be accommodated at backpackers, or in “containerised pod structures”. These “structures” could either be placed on vacant land next to existing shelters, or the expanded Culemborg Safe Space, or spaces within Mitchells Plain, Table View, and Strand.

A report by the South African Human Rights Commission refers to some “horrific conditions” at the relocation camp for the City’s homeless population.

The site has been subject to harsh criticism from civil society, with many people calling for it to be closed.

The Commission’s report was based on the observations of five monitors, including Dr Gilles Van Cutsem of Médecins Sans Frontières, lawyer Dr Orly Stern, addiction specialist Dr Duncan Laurenson, social worker Janice King, and Tauriq Jenkins. The report recommends the immediate phased closure of Strandfontein and the “repatriation of those [who were] relocated to Strandfontein and the sheltering of those who remain street-based”.

The report also suggests that the City use smaller sites or shelters to house homeless people with strict social distancing guidelines.

Van Cutsem, an epidemiologist specialising in HIV and tuberculosis, suggested that the City’s decision to house its homeless population at the mass site placed them at greater risk for infection with Covid-19.

Dr Stern considered the gender dynamics at the site and reported “a litany of abuses”. Most women interviewed by Stern said they felt unsafe.

Dr Laurenson’s report revealed that access to healthcare was difficult, and that “the site lacked medical monitoring, dedicated medical staff in the tents, medical staff with experience in treating substance use disorders, mental health support, after hours services, and emergency services”.

Janice King’s report stated that “no daily report was being sent from the NGO tent managers to the City Site Manager”. King said that the City’s claims that people are free to leave the camp does not find expression in how people are told such information, with people being threatened with arrest should they leave. King said there were children at the site and only one social worker.

At the time of publication Badroodieen and mayor Dan Plato had not answered further questions sent to them. This article will be updated if they respond.