Covid-19: SASSA runs out of food parcels in Uitenhage 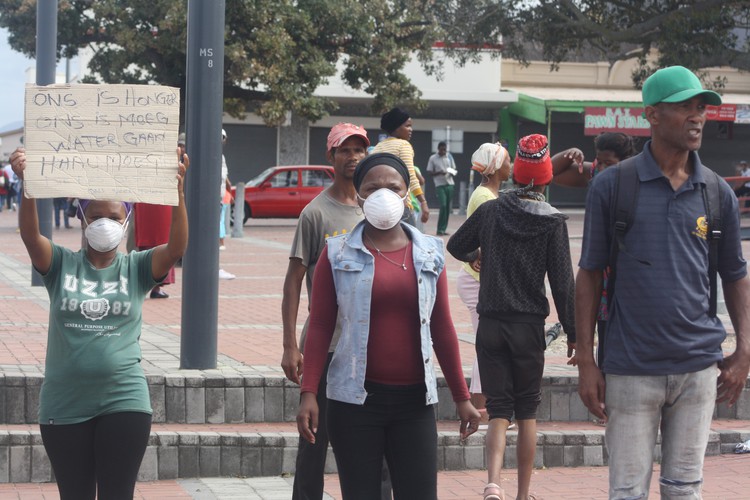 SASSA in Uitenhage is calling for calm after dozens of frustrated residents protested outside its offices, demanding food parcels on Tuesday. Photo: Thamsanqa Mbovane

The South African Social Security Agency (SASSA) in Uitenhage is calling for calm after dozens of frustrated residents protested outside its offices, demanding food parcels on Tuesday.

“Food parcels are one of the means or ways we issue out [the Social Relief of Distress] grant,” says SASSA Eastern Cape spokesperson Luzuko Qina.

“During Covid-19, the demand has increased owing to the fact that people who used to be able to fend for themselves, are now unable to due to lockdown. We requested ward councillors to assist in identifying people who are in distress to make the necessary intervention,” he said.

Earlier on Tuesday, dozens of residents from wards 42 to 53 had gathered outside the offices in Constitution Road at 8am until they were escorted out of town by the police later that afternoon. They filled out applications for the Social Relief of Distress grant and were told to wait for an SMS notice to collect their food items. But after three weeks of waiting, the group decided to get answers from officials at the office.

Police were called and residents were warned to leave or be arrested for contravening the lockdown regulations.

Resident Xolani Nelani from ward 50 said: “Our councillor Lunga Nombexeza gave out groceries mostly to people who responded when he posted about SASSA groceries in his Facebook account. I have proof that Facebook friends of his who commented to his post have received food from him.”

Nelani said that when they got to the SASSA offices, they were told at the gates by an official that “SASSA has run out of Covid-19 groceries” and they would “call us or send us an SMS but many of our neighbours are receiving food in front of us.”

Another resident from Pola Park informal settlement, Nokuzola Dyafta, said: “[On Monday] I had an appointment with a social worker in town and saw a mob at SASSA. People who got food are those from ward 50 who are ward committee members and relatives of Councillor Nombexeza.”

He told GroundUp that initially SASSA had told councillors that anyone who submitted forms, qualified for the food parcels. “We were later told by SASSA that those who earned grants or were on the SASSA system did not qualify … We are not hiding anything in ward 50. We posted a list of all qualifying people on the ward 50 Facebook page. I had to remove all the people with the same surname as mine to make sure there are no favours,” he said.

Nombexeza said there R5.9 million had been allocated to the 60 wards in Nelson Mandela Bay.

Phakamisa Mfama (ANC) of ward 42 councillor, said: “I did not prioritise any ward committee members too. It’s strictly residents.”

SASSA’s Qina acknowledged that Uitenhage “had huge numbers of people” in need of food parcels. He said that the first 72 parcels that were distributed, were part of its first wave.

“We urge our communities to bear with us as the next wave of delivery is underway. Government will do everything humanly possible to alleviate poverty,” he said.