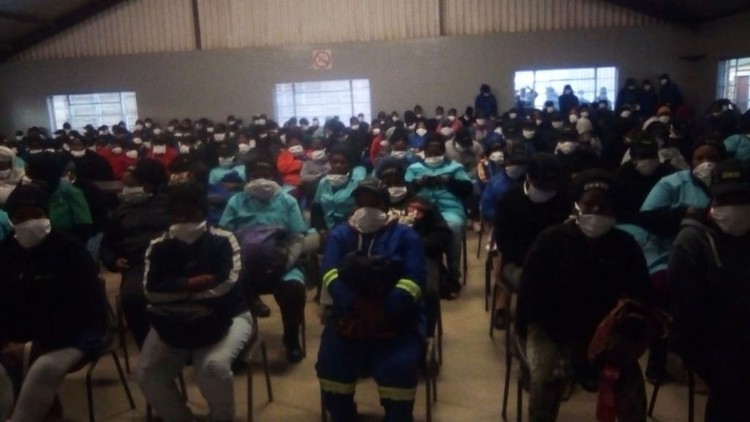 The packed community hall where workers living in Ndluli were screened, but were seated on chairs less than half a metre apart. Photo from Facebook

Workers at the Ceres Fruit Growers packhouse and Nduli residents were sent into a panic this week as news spread of an employee from the community testing positive for Covid-19.

The workers sought help from the Food and Allied Workers’ Union (FAWU), and a local community leader after receiving an SMS - seen by GroundUp - sent by the managing director, Francois Malan, stating that a woman worker had tested positive for Covid-19 and that screenings would be conducted over the next few days.

When GroundUp contacted Ceres Fruit Growers on Wednesday, we were told that they could not confirm that a person tested positive for the coronavirus.

An employee, who has asked to remain anonymous, said they were concerned as workers were still expected to report for work despite the announcement by management. She explained that the woman who tested positive for Covid-19 lives in Nduli which is a densely populated township in Ceres.

“We found out [on Tuesday] during the day. They sent us a message and told us that they would provide us with masks and we still had to go to work,” said the employee.

Andile Gili, Nduli ward committee member, says he is in talks with employees who contacted him. Gili said he was informed that the woman who tested positive had not been to work since she returned from a funeral in the Eastern Cape, but that her husband, who also worked at the packhouse, had been to work.

“If a person has tested positive, her husband should also be a risk,” said Gili.

Gili said that workers from Nduli were called into a hall for screening. They were given masks, but were seated close together in the hall and not spaced out as is required under lockdown regulations. Gili shared photographs on social media of the packed community hall where workers, some still in uniforms, are seen wearing masks but sitting on chairs less than half a metre apart.

FAWU is currently investigating the matter, according to deputy general secretary Mayoyo Mngomezulu. “We have members that are going to be affected. We’re going to be working with the company to see how the workers can be best assisted and tested.”