With eight confirmed cases, mayor hoped to “break the chain” 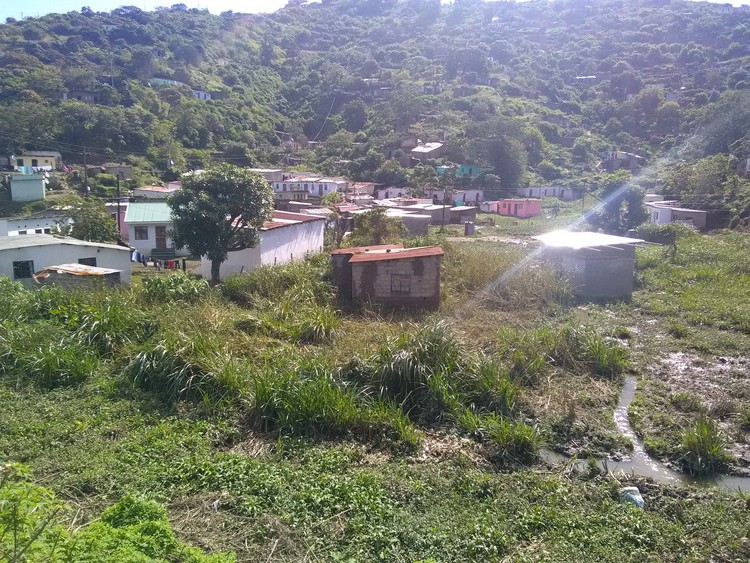 In Green Farm settlement life went on as usual at the weekend in spite of the mayor’s call for a total shutdown. Photo: Sibahle Siqathule

Residents of Port St Johns mostly ignored the call by Mayor Nomvuso Mlombile-Cingo for a total shutdown over the weekend in the Eastern Cape coastal town where eight people have now tested positive for the coronavirus.

The mayor called on all businesses, taxis, private vehicles and petrol stations in the town to suspend all activities from the morning of Friday April 17 until Monday April 20. Residents were asked to stay home.

She said there were now eight confirmed cases of Covid-19 in the town.

“Two funeral parlour workers have tested positive for coronavirus. We don’t know how many funerals they have conducted and how many people they may have infected,” said Mlombile-Cingo.

She said the total shutdown was proposed as an attempt to stop the spread of the virus ahead of one of the busiest weeks for Port St Johns. About 1,000 Expanded Public Works Programme employees and teachers would get their salaries on 20 April and municipal workers on 25 April, she said, and the town will be packed as they do their grocery shopping”.

“We were trying to break the chain [of infections] before this week,” Mlombile-Cingo said.

But very few businesses adhered to the mayor’s call, and residents were in town over the weekend doing their shopping or just hanging around. Taxis were going around in the morning and afternoon, customers were queueing at shops and people were sitting together in the shade.

It was business as usual too in Green Farm informal settlement and Caguba village, with children playing soccer, and people walking around in the streets or gathering at spaza shops. The closure of some shops and the presence of police at roadblocks and on the road were the only indication of the lockdown.

Business owner Stephrina Mbuthuma, who runs a daycare and a boarding house, said she supported the mayor’s call but life was difficult. Both her businesses have been closed since the start of the lockdown.

“My family has been left with no income. What’s more frustrating are people who are not following the lockdown rules. This will cause lockdown to be extended and people will suffer even more,” said Mbuthuma.

Eastern Cape premier Oscar Mabuyane has expressed a desire for the province to engage in a total shutdown. During a video conference he said he would lobby national government for approval on the matter.