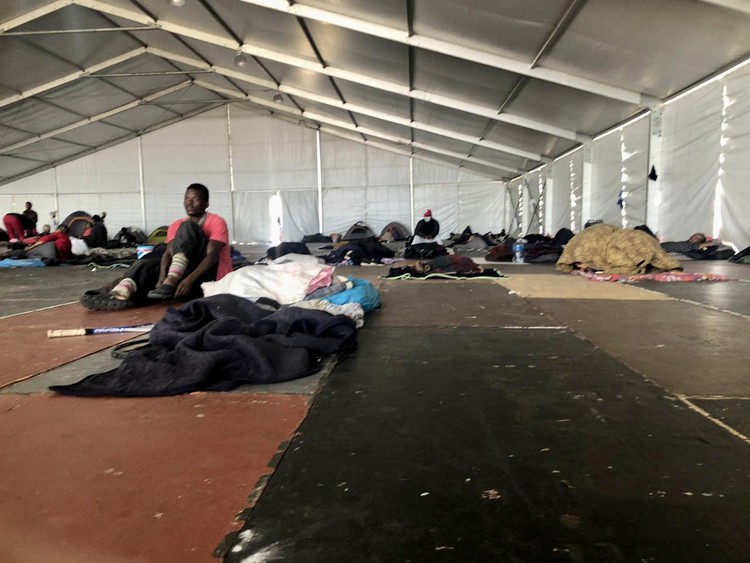 On Tuesday a riot broke out at a tent set up by the City of Cape Town for the homeless. Photo: Lucas Nowicki

By Lucas Nowicki and James Stent

Homeless people at the Strandfontein Sports Grounds, Cape Town, were shot at with rubber bullets by police after they began to protest about conditions at the tent camp set up as part of the national lockdown to disrupt the spread of Covid-19.

The protest possibly broke out after some people who were moved to the camp demanded to be let out. Many people GroundUp spoke to said that they had not been properly fed and they did not have access to basic amenities.

GroundUp saw a group of homeless people break down a barrier fence. Police then shot at the group with rubber bullets. They retaliated by throwing stones. Soon after, a huge police contingent quashed the camp rebellion.

Street people across the city have been grouped in four different tents, according to where they were picked up by police. Each tent has a small outside area surrounded by fencing. It is believed that the tent at the epicentre of the protest housed people from the southern suburbs. This tent is now under total lockdown.

Since Sunday evening, hundreds of homeless people have been moved to the City’s temporary site at the Strandfontein Sports Grounds, as part of the City’s response to the national disaster. Upon arrival, people are screened for Covid-19. There are no other health services for the many underlying health issues, including mental health, substance dependency, and chronic illness. There are many people in the camp with chronic illnesses, such as HIV and TB, and there is no identifiable way that people with these conditions can get access to treatment. There is no protective equipment, such as masks, and there is one basin at each marquee for people to wash their hands.

Inside the tents, there is no social distancing. Some people have set up smaller tents inside the marquee, but most are sleeping close together, because of lack of insulation inside the tents.

Many of the people GroundUp spoke to claimed they were told that they would be moving to individual accommodation, and would be fed and kept warm. They were not informed about the conditions at the camp. Many now want to leave.

The City has said that homeless people were moved to prevent a health crisis, but according to health professionals who have witnessed conditions at the camp, the camp may be putting people at risk. Doctors visiting the site expressed shock at the conditions. One described it as a “shitshow”.

Mayco Member for Safety and Security JP Smith released a statement on Tuesday afternoon. He said that the conflict involved a newly arrived group of street people from Somerset West.

“They were under the impression that they would be allowed to return to their areas after being screened at the site, and when it became clear that they were required to remain in Strandfontein, a few of them pulled down one of the internal fences and four climbed over the perimeter wall,” said Smith. “Three have since been apprehended.”

Smith continued: “While some of the group has since indicated that they will remain on site, the City would like to make it clear that, according to SAPS, any person who leaves the site will be in violation of the national lockdown regulations and will be dealt with accordingly.”

He said: “The City remains committed to ensuring that street people are offered a place to stay for the duration of the lockdown, as instructed by national government, and to provide the necessary amenities.”