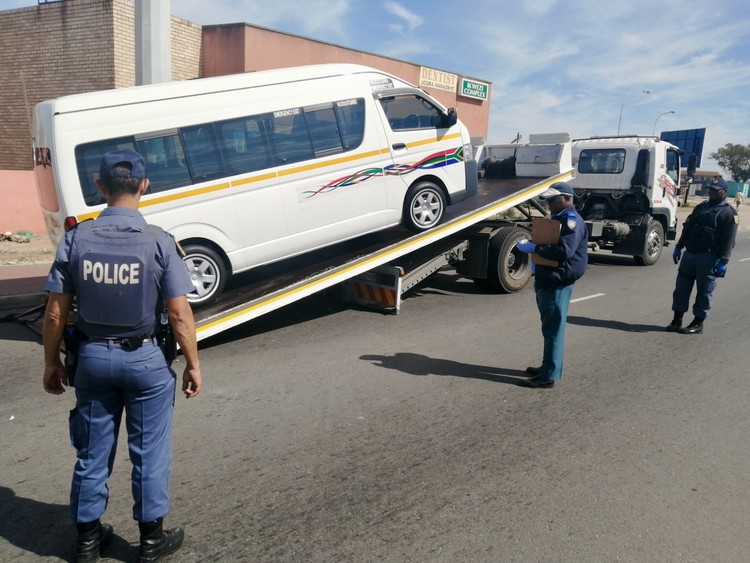 Police and soldiers impounded taxis in Enjoli Square taxi rank in KwaZakhele, Port Elizabeth, on Tuesday, after some taxi operators went on a wildcat strike. They were demanding compensation during the national lockdown to disrupt the spread of Covid-19. Hundreds of social grant beneficiaries and shoppers were left stranded.

As early as 5am, taxi drivers blocked roads with their vehicles. They chased informal taxis away, ordering them not to ferry people. The M17 to Motherwell, Daku Road, Enjoli Square, Enjoli and New Brighton roads were blocked.

Police used stun grenades and rubber bullets. The K9 dog unit was called to arrest the protesters. Soldiers and military police arrived in armoured cars and shut down the taxi rank. Taximen and taxi fare collectors were arrested.

Luwezo Fati, a passenger from Wells Estate, was hit by rubber bullets. “This is painful because I only came here to buy food,” he said.

Pensioners Lovey and Nomsa Pike were among many left stranded. Nomsa said, “I came all the way from KwaNoxolo Township to get my [social] grant at Shoprite in Emagaleni township. I arrived here at 6:30am and now is 11:30am, but I can’t go back home because there are no taxis.”

Nobuntu Vungayi, 73, who was left stranded at Kenako Mall, said, “Jikeleza taxi drivers are charging us R30 and R50 to take us to our homes, instead of a normal R11 taxi fee.”

Mawonga Johnson of Uncedo Taxi Association said, “This government treats us as fools. We are not consulted … Our working hours and number of passengers were reduced, why are we not being compensated for that? These taxis are still owned by banks and we have to pay their big instalments.”

“A 15-seater taxi is only allowed to carry seven passengers. A six-seater Avanza taxi has to carry three passengers. We cannot make a living with such a little income,” he said.

“Only the social grant earners are important to this government. Since yesterday our working hours were increased from 5am to 8pm to transport the SASSA beneficiaries. We decided not to work today in order for this government to see the need and importance of our services in this country. We will protest until our demands are met.”

But Kwayiyo Msustwana, spokesperson for Uncedo Taxi Association, distanced the organisation from the taxi drivers’ actions.

“On Wednesday last week a decision was taken and our chairperson, Zamani Rasmeni, ordered us to tell our members to suspend services after President Cyril Ramaphosa announced the 21 days of the national lockdown last week.

“Since Friday, we suspended all our operations heeding the President’s call. We took that decision because we did not want our members to have their vehicles impounded. If someone has his vehicle impounded while we suspended our services it’s his own problem.”

“What happened today was a result of the members who did not receive our chairperson’s call that no Uncedo Taxi Association will operate up and until the President makes another call that we can operate again after the lockdown,” he said.

Msustwana said, “It would be better to be compensated during this lockdown … There is no way we can allow our taxis to transport one person from Motherwell for R12. We will be running our business at a loss.”

Songezo Mpanda, Chairperson of the Nelson Mandela Bay Regional Council, which falls under the South African National Taxi Council (SANTACO), said, “Money is not more important than our lives. We should heed to the national lockdown. The lockdown is meant to protect us, the drivers, commuters and families.”

“SANTACO is handling this matter with Transport Minister Fikile Mbalula to get compensated,” he said.

Police spokesperson Captain Andre Beetge said he was awaiting final confirmation but about ten taxis were impounded and several arrests were made.