Covid-19: Patients turned away as PE clinic runs out of water 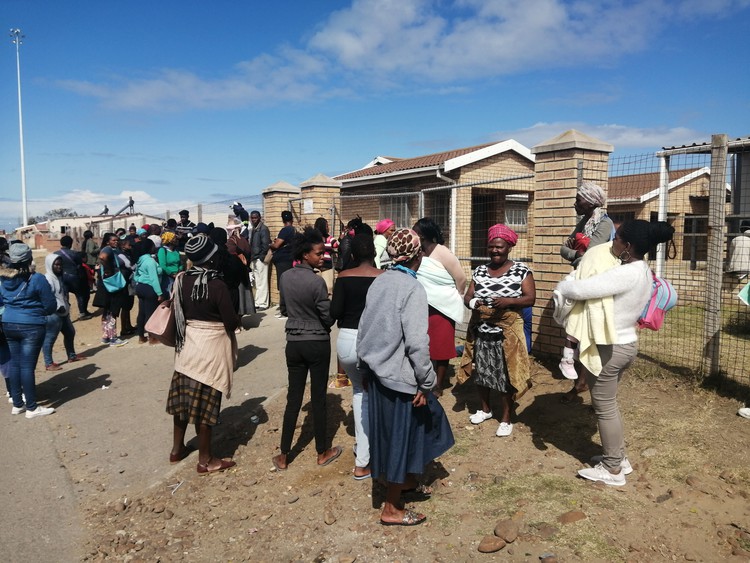 Dozens of patients stood outside the gates of Max Madlingozi Clinic in KwaZakhele, Port Elizabeth, after nurses turned them away because there was no water at the facility. Photo: Mkhuseli Sizani

Dozens of patients gathered outside the Max Madlingozi Clinic in KwaZakhele, Port Elizabeth, after being told by nurses they could not be helped because there was no water at the facility.

“My baby is sick and we are not here to drink tablets,” said Nonzaliseko Luyabo, who had been waiting at the clinic since 6am on Tuesday with her two-year-old. She had not been served when GroundUp arrived at noon.

“Why don’t our nurses use the sanitisers and water from the water tanks? Are they hiding behind the Covid-19? Most people are here to collect their medication which they take and drink at home,” she said.

Another patient, Phakamisa Thomas, said she arrived at 4am to replenish her hypertension medication. “We are standing outside on long queues because of the Covid-19. Now everybody is frustrated. The nurses say we must go home and come back tomorrow.”

Nompumelelo Makaza said that by midday only 12 babies were seen, ten family planning patients, and six for chronic conditions. “I have been standing here since 6am and my hypertension treatment is finished. We told [the nurses] that we are not going back home until we are serviced. I don’t think the issuing of chronic medication needs water.”

When the group became impatient and rowdy, councillors for wards 22 and 24 were called to intervene and restore calm.

Beverly Snayers, Department of Health Acting District Manager for Nelson Mandela Bay Primary Healthcare Services, said services were disrupted because of a burst water pipe in the area which did not only affect the clinic. She expected the situation to improve by Wednesday.

Asked why the facility had not used water from its tanks, she said, “The water from our tanks is polluted. Also we have a problem of connections with our tanks to our systems. We are busy addressing this problem with our municipality.”

Ward 24 councillor Kholekile Boqwana blamed decaying municipal infrastructure. Boqwana said that for three days the area had been without water.

“According to the workers the pipe burst because it is old. And we have a huge problem of decaying infrastructure … I organised a water tanker and 16 drums filled up with water. Services then resumed [at the clinic],” said Boqwana.