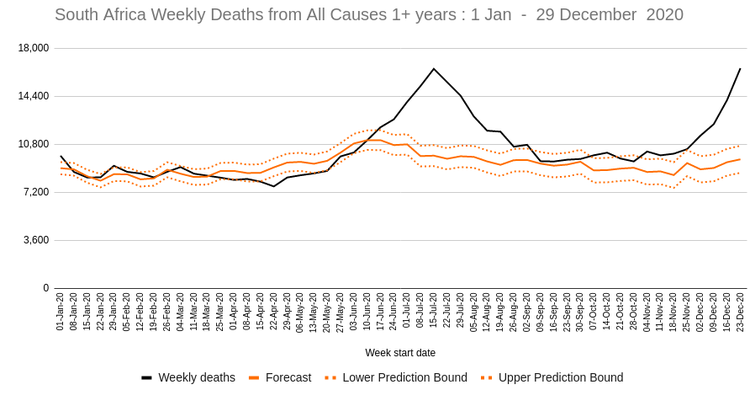 This graph from the latest weekly mortality report published by the South African Medical Research Council shows that South Africa’s second Covid-19 surge, currently ongoing, is now worse than the first one that peaked in July.

Every evening the Minister of Health publishes a statement with the confirmed Covid-19 infections and deaths over the previous 24 hours. Wednesday 6 January has the worst figures yet: 844 deaths and 21,832 new cases. 452 of those deaths occurred in the Eastern Cape and 149 in the Western Cape. The official Covid-19 death toll now stands at 31,368.

These numbers are likely an underestimate. The official death toll is substantially lower than the actual number of Covid-19 deaths because some people die without being diagnosed with the disease.

The Medical Research Council (MRC) reports excess weekly deaths — the difference between actual recorded deaths and the expected number of deaths. Its latest report, for the week ending 29 December, calculates nearly 6,840 excess deaths in that week, the highest yet (the previous worst week — ending 15 July — had about 6,500 excess deaths).

The MRC calculates that there have been over 65,000 excess deaths since 6 May. As we’ve explained previously, it is likely that most of those are from Covid-19. In fact the Covid-19 death toll may even be higher because deaths from other infectious diseases, such as influenza, declined this past year, as did murders and vehicle accident deaths. (Incidentally, the scientists who compile the weekly MRC report are extremely good at what they do.)

It is highly likely that more than 1 in every 1,000 South Africans have already died of Covid-19.

At the height of South Africa’s HIV epidemic in the mid-2000s, about 800 people were dying daily of AIDS, on average. In the week ending 29 December over 970 people were dying daily of Covid-19. On the other hand the HIV death toll was sustained at this extraordinarily high level for several years: the Covid-19 death toll will not continue at such a high level for such a long period of time.

South Africa’s second surge, like many other countries, is now worse than our first one that peaked in July. This may be due to a new possibly more infectious strain of SARS-CoV-2, but it may perhaps also be explained by many more uncontrolled outbreaks dispersed across the country, leading to many more infections. This has likely been exacerbated by lower adherence to physical distancing and mask wearing in the past few months.

We urgently need vaccines to be rolled out. We also need better adherence to physical distancing and mask-wearing.

CORRECTIONS: An arithmetic error in an earlier version of the article has been corrected. Also, the article originally reported that the stats were for 7 December. They were actually for 6 December.