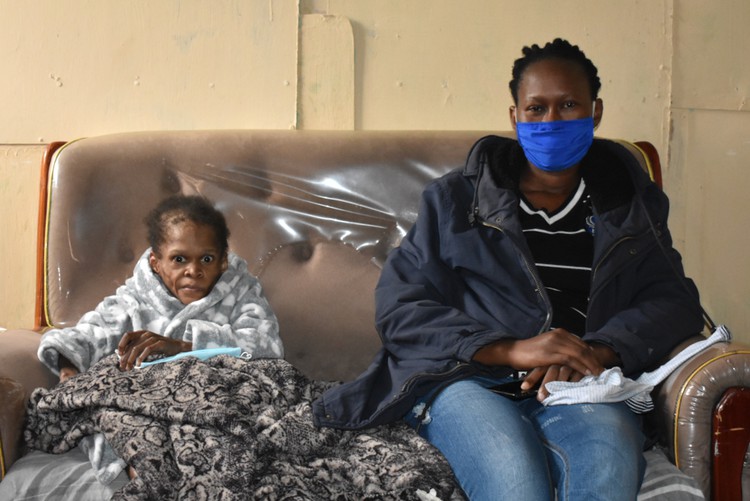 19-year-old Anam with her mother, Yoliswa Vinjwa, in their home in Khayelitsha. Photo: Buziwe Nocuze

Since her daughter has multiple co-morbidities, the Covid-19 pandemic has made Vinjwa anxious for her daughter’s life.

“Our shacks are too close to each other making it difficult for me to protect my daughter from the virus … Most people in this area do not wear face masks and I always tell people not to come close to her and they do not take the virus seriously,” she says.

Vinjwa applied for an RDP house in November 2016, anticipating that the City of Cape Town would prioritise her application because of her daughter’s condition. Three and half years later, she is still on the waiting list.

Mayoral Committee Member for Human Settlements Malusi Booi confirmed that Vinjwa is on the housing list. He said, “All state-subsidised housing projects include beneficiaries with special needs. Applicants can only be considered for special needs’ opportunities if the relevant medical certificate has been submitted to the housing database department. Vinjwa is encouraged to have a doctor fill in the attached form to confirm her daughter’s illness.”

But Vinjwa says she did fill in all the forms, including the doctor’s form, in 2016.

“It is difficult staying here, that’s why I need to get a house because people are careless and they don’t understand my kid’s condition,” says Vinjwa.

She has lived with Anam for eight years in the three-roomed shack they share with three other adults. Anam shares a bed with her mother. She is now 19-years-old, but physically restricted. Her mom says she was diagnosed at the Red Cross War Memorial Children’s Hospital when she was ten as having CANDLE, a rare, genetic auto-inflammatory disease.

“Sharing one toilet with a lot of people is not healthy for my daughter, that’s why I decided not to take her there [to the communal toilets] anymore.” Vinjwa, who was forced to leave her job to care for her daughter, says she uses a bucket now for Anam. “There is nothing I can do though I know relieving herself in a bucket is not healthy.”

The family survives on a disability grant.