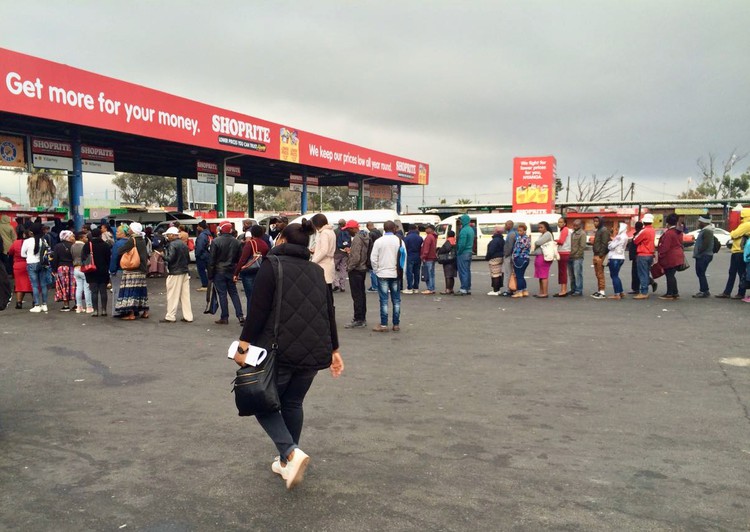 Minibus taxi commuters in Nyanga and Gugulethu say they fear for their health as more people are diagnosed with Covid-19. Standing in a long queue at the Nyanga taxi rank, Pamela Mduku, from Europe in Nyanga, says she uses taxis four to five times a week as she goes to different places dropping off her CV in search of work.

“These days I get into a taxi with an uneasy and worried feeling because of the coronavirus. There are no precautions that I am taking to protect myself … No measures have been taken by the taxi drivers to make sure that we are safe,” she said.

“But what can they actually do though? I think this problem can only be helped if every person takes responsibility. But for now, the coronavirus is just a hot topic in the taxi during our journeys,” said Mduku.

At the Gugulethu taxi rank, Jason Mafi was catching a taxi to his work in Century City. He prefers to sit in the front seat, which means he has to take and count the passengers’ fares and he is worried.

“I am touching people’s money everyday, and I heard that this virus can be contracted by just a simple touch, so I am extremely worried. Then you also get those passengers who complain when you open a window as well. As public transport users we are totally unsafe,” he said.

As soon as he gets to work, he washes his hands, said Mafi.

Regional Chairperson of the Cape Amalgamated Taxi Association Victor Wiwi, who is based at the Nyanga rank, said the organisation was aware of the pandemic and of fear among commuters, but said no measures had been taken yet. They were waiting to hear what measures the transport department would implement.

In a statement released by the City of Cape Town transport directorate, Felicity Purchase, the responsible mayco member, said the City will in the coming days implement several measures at minibus taxi facilities, and MyCiTi routes.

Signage and posters informing and educating commuters about Covid-19 and personal hygiene to avoid being infected will be put up and distributed at facilities.

Measures include hand sanitiser at MyCiti buses when boarding and limiting the number of standing passengers on the bus to half of the standing capacity.

Purchase said: “The Minister of Transport is engaging the South African National Taxi Council (SANTACO). We will take the lead from the National Government in this regard.”

She said the City requests all bus and minibus taxi passengers to practise hygiene and travel guidelines, which include opening windows, avoiding public transport if you are elderly, making use of hand sanitisers and wearing protective masks or scarves. Drivers should be cleaning their taxis inside out with a disinfecting liquid on a regular basis, and passengers should see that they have the correct fare so as to minimise contact.

Ntomboxolo Makoba-Somdaka, spokesperson for the provincial transport minister Bonginkosi Madikizela said that there is a dedicated workstream for transport which meets daily and is feeding back into Cabinet, which is also meeting daily.

“Outcomes of the meeting and measures in place will first be discussed with the taxi industry before it is communicated with the media,” said Makoba-Somdaka.

Golden Arrow buses will also introduce measures which will include the daily application of specialised 24-hour germ and virus-killing surface cleaner to their 1,200 buses, load reduction strategies where possible, providing drivers with masks, gloves and hand sanitiser, as well as ongoing passenger and staff education.

A Twitter user who goes by the handle @ThaboBluebird posted photos showing how he travels on taxis: with a mask and gloves. He also photographs the taxi’s number plate so that if he gets infected, the health authorities can trace his contacts on the taxi.

As of Wednesday morning the number of confirmed Covid-19 cases in the country was 116 with an increasing number due to local transmission.