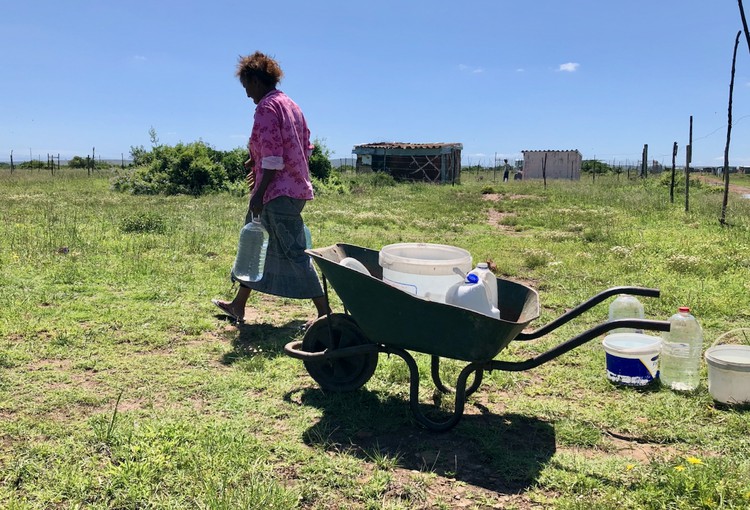 A resident in Makhanda collects water from a Gift of the Givers water tanker. Archive photo: Lucas Nowicki

Residents in Makhanda are concerned over what impact the ongoing water crisis will have on their ability to prevent the spread of Covid-19.

Makana Municipal spokesperson Yoliswa Ramokolo confirmed that “water shedding will continue as planned”, with water cuts every third day for the entire municipality. She said residents should “store water for the one day it is shut off” so that they are able to wash their hands.

On Wednesday, members from the Unemployed People’s Movement (UPM) staged a sit-in at the council chambers. They demanded that the municipality address the water crisis to ensure that poor residents could follow the necessary preventative measures as advised by the World Health Organisation and the South African Department of Health, which stress regular hand washing.

“The president said we must sanitise and wash our hands. Hand sanitiser is a luxury for the poor; what should be accessible to them is water,” said Ayanda Kota, spokesperson for UPM.

Makana water and sanitation manager Gubevu Maduna said that the municipality did not have enough water and it was weighing its options. A plan of action will be communicated later this week, he said.

Eastern Cape Red Cross branch manager Coralie Peo said the organisation was “concerned about the impact of water scarcity on the lives of the most vulnerable”.

Peo said the Red Cross could be setting up local hand washing water points in communities where water availability is a problem.

She said that they had 60 trained community volunteers in the province, ten of them in Makhanda, who will provide community-based health communication and services with the Eastern Cape Department of Health.

On Monday, Eastern Cape Premier Oscar Mabuyane announced that extra water tanks and soap would be provided to communities in drought-stricken areas. The Department of Health did not reply to queries about the logistics of this undertaking.

This week, Rhodes University announced that it is closing until 14 April.

The annual Makhanda National Arts Festival also announced that the 2020 festival would be “going virtual” in order to “share some magic and hope to those confined to their homes” while providing vital work for artists.