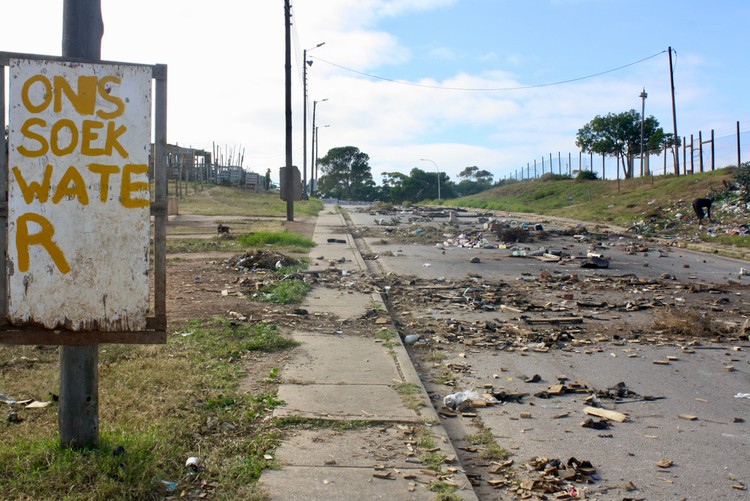 “This is torture – we can’t bath, cook or drink water like other citizens of this democratic country,” says Hugh-Reece Williams, leader of a 14-shack informal settlement in ward 48, Uitenhage.

“For 21 days the government expect us to stay at home to prevent the deadly Covid-19, yet they can’t provide us with water,” said Williams.

On Wednesday afternoon, the shack dwellers used prickly pears, car tyres and anything they could use to obstruct Doorenhoek Street on the border of their settlement.

They have no toilets, electricity or water on the land they occupied a year ago.

“When we carry buckets to go to McCarthy informal settlement nearby, the police chase us saying we must stay at home because it’s a national lockdown,” said Williams.

“When we take our buckets to draw water from the nearby Afghanistan informal settlement, the people in that settlement complain of having few standpipes … saying that we must organise our own standpipes and water instead of troubling them,” he said.

“If we burn tyres, the only water they would bring to us is the one they will use to extinguish the fire,” said Ettienne Malgas. “We also need food because out of 25 people who stay in this settlement, [we have] only one breadwinner who gets piecemeal jobs … We can’t go to town to beg for food because we are expected to be homebound.”

Peter Davids, a plumber who lives in the settlement, said it is on a serviced site and the underground infrastructure for sewage and water was there, only it had been shut off by the municipality.

On Wednesday afternoon, mayoral coordinator in the Uitenhage area, Mgcini Mejane, visited the residents. He said sanitisers and water would be arranged.

Mejane said the site was meant for RDP houses. “There was a list on the database of 42 families, but it seems the area’s councillor was uncomfortable that certain people jumped his list to invade [the land] … I know there is a beef between themselves and their councillor, Tyrone Adams.”

“I will engage the mayor because we need to put differences aside and stop the spread of the Covid-19 by protecting everyone.”