In January the City demolished the only toilet in Mandeni 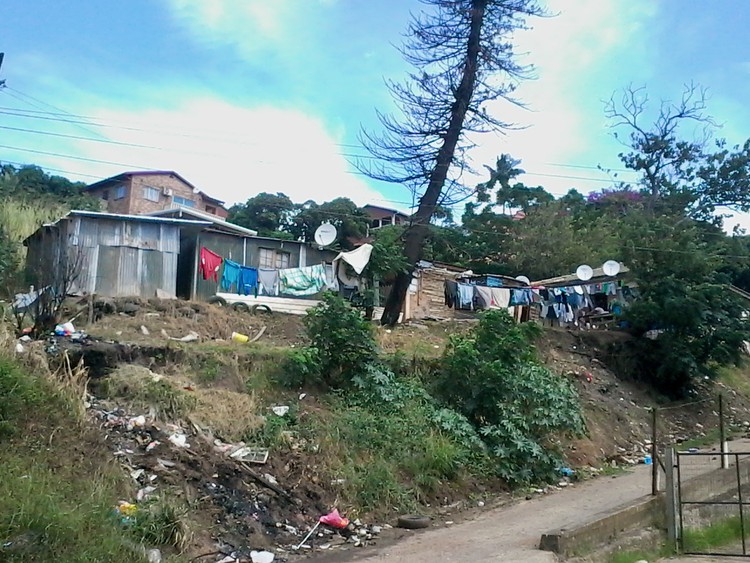 Residents of Mandeni informal settlement, home to 80 people, ask how they are meant to fight Covid-19 when they have no water. Photo: Nokulunga Majola

Mandeni informal settlement in Redhill, Durban, has neither water nor toilets. This despite a promise by the mayor three weeks ago, just before the lockdown, to provide water tanks and communal ablution facilities.

On 24 March, eThekwini Mayor Mxolisi Kaunda told the executive committee that plans were in place to assist approximately 240,000 families living in 590 informal settlements across the metro.

“To ensure that people exercise personal hygiene and wash their hands regularly, we are providing water storage tanks in all informal settlements where no communal ablution facilities exists,” Kaunda is quoted in a statement released by the City on 25 March.

Although many informal settlements have received water tanks and chemical toilets, the residents of Mandeni still have to walk a distance to collect water at Mathambo, a neighbouring settlement.

Residents relieve themselves at nearby railway line or in the bush and use plastic bags at night.

Mandeni was established ten years ago. It has 38 households and about 80 people in total.

Local committee member Leon Benniett said there was one pit toilet but the City demolished it in January. He said police had stopped people on their way to Mathambo to collect water.

Chairperson of Mandeni informal settlement Musa Duma said, “We were given house numbers by the City which makes us legit, but in January the City demolished nine shacks and the pit toilet that we all shared. Ever since then, we have been struggling with sanitation.”

“This is a disaster waiting to happen. A health risk not only to shack dwellers but to residents as well,” said Duma.

“We made a request with the City in early March for ablution facilities and water but up to date we haven’t heard anything from the City. Are we not people as well?” he asked.

On Tuesday, the City said it was awaiting information from the relevant department. Subsequent attempts to get comment have not been fruitful.