Covid-19: “I decided to return to the robots because of hunger” 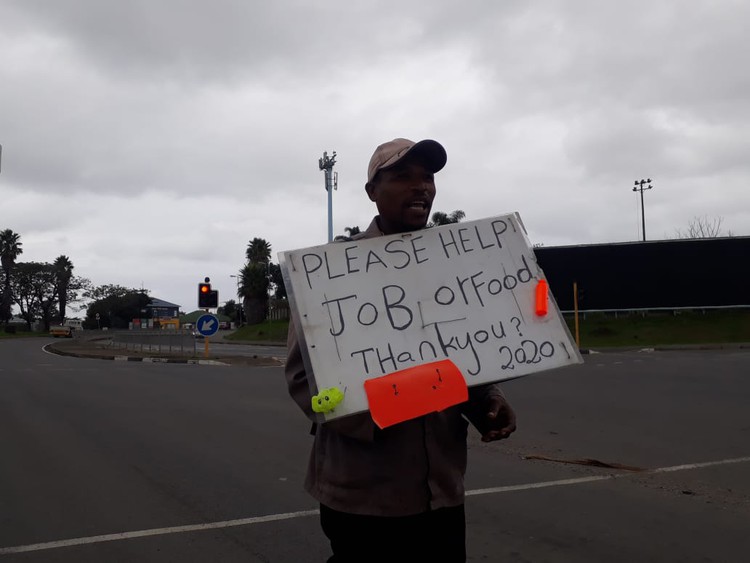 Phumzi Nyubatya stands at the robots near Vincent Mall every day hoping to be offered a piece job or something to eat. Photo: Nombulelo Damba-Hendrik

Every morning Phumzi Nyubatya from Cambridge informal settlement in East London stands at the robots near Vincent Mall hoping to be offered a piece job or something to eat.

Nyubatya said before the national lockdown, he was able to find work. “ I would find piece work for four days a week, earning from R50 to R150 a day. But now things are tough. Some days I go home empty-handed or with R30,” he said.

Nyubatya said he often spends most of the day in a game of hide-and-seek with law enforcement officers who chase him away from robots, saying he is not allowed to be outside.

“I decided to return back to the robots because of hunger. I couldn’t continue to stay at home with an empty stomach. Even though I stand here looking for a job, I take anything. Even if people throw 50c, I take it.”

In Amalinda next to the CTM building, half a dozen men were waiting in the road with bags. Some were carrying tools. None were wearing masks.

The men said they had not benefitted from food parcels and vouchers in their wards and had to return to the spot to make money. Most of them arrived at the spot as early as 5am hoping to be picked up by an employer, they said. “This is now risky because we have to stand here in the dark not knowing how many employers will come,” said one of the men.

Nkosinathi Mahodi from Amalinda Forest also relied on piece work to support his family. Mahodi was registered for the food voucher relief but he did not receive a voucher. The father of one now relies on generous neighbours for food.

GroundUp was informed that ward councillor Mzukisi Relu had scratched some people’s names from the relief application list where Mahodi’s name was listed.

When we contacted Relu, he first denied the allegation but then admitted the people scratched off the list “were still young and fit to work”.

He said, “Only 800 people could benefit from the food vouchers and my ward has close to ten areas and each area had to benefit.”