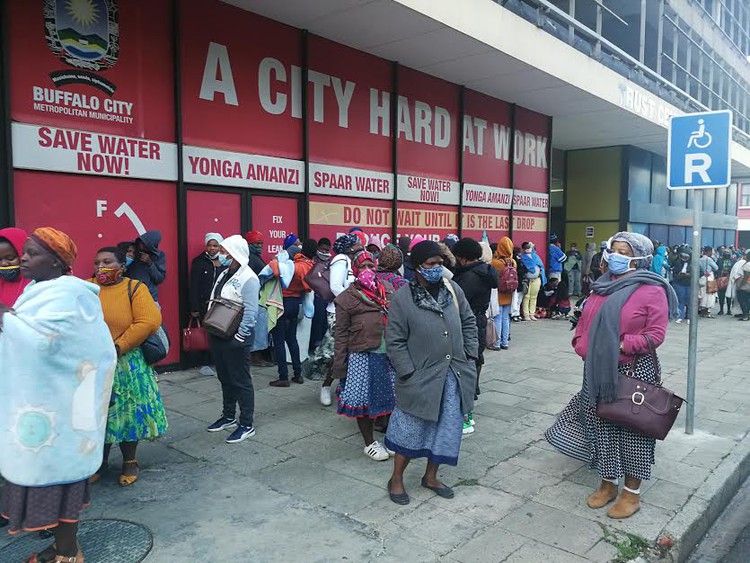 Only mothers with newborn babies were served at the SASSA offices in East London on Wednesday. Hundreds of other applicants for grants were turned away Photo: Johnnie Isaac

Hundreds of applicants for social grants were turned away from South African Social Security Agency (SASSA) offices in East London on Wednesday.

Desperate applicants risked Covid-19 infection by not observing social distancing and pushing to be as close as possible to the front of the queue. The offices opened this week after being closed for the early phase of the lockdown.

Some applicants said they had arrived as early as 2am but had found people already waiting.

When SASSA staff arrived and tried to organise the applicants into queues and encourage social distancing, there were scuffles.

Applicants said that after GroundUp left, police had been called in and had arrived with army back-up to rearrange queues and enforce distancing.

Applicants who had come for other reasons were turned away and told by SASSA officials to use the call centre and WhatsApp number.

Nontsikelelo Nocanda told GroundUp it would be impossible for SASSA to register all applicants with the current system.

“We were hoping that when SASSA reopened its offices they would do what they used to do previously and deploy officials to conduct applications in the wards of the applicants, because since Covid-19 lockdown there has been an increase of people who need SASSA services,” said Nocanda.

Another disappointed applicant, Celia Jongiwe, said she had been trying to register her sister’s child after she was told that someone else had been receiving a grant in the child’s name in Cape Town. “I was told to bring police affidavits and a letter from the social workers but now I’m being turned away. I have nothing and have been trying to do this before we were locked down,” said Jongiwe.

Yolanda Guwe, mother of a three-month-old baby, said she had been given a ticket to return on Thursday. “I feel much better because I won’t be queuing for nothing.”

SASSA Eastern Cape Spokesperson Luzuko Qina said the agency was using only one third of its workforce due to lockdown restrictions.

He said SASSA local offices would provide services to “a limited number” of pension applicants on Mondays and Tuesdays, and to Child Support and Foster Care grant applicants on Wednesdays and Thursdays.

“On Fridays we serve those whom we were not able to serve on the days above.”