Limpopo moves people living on the streets into shelters 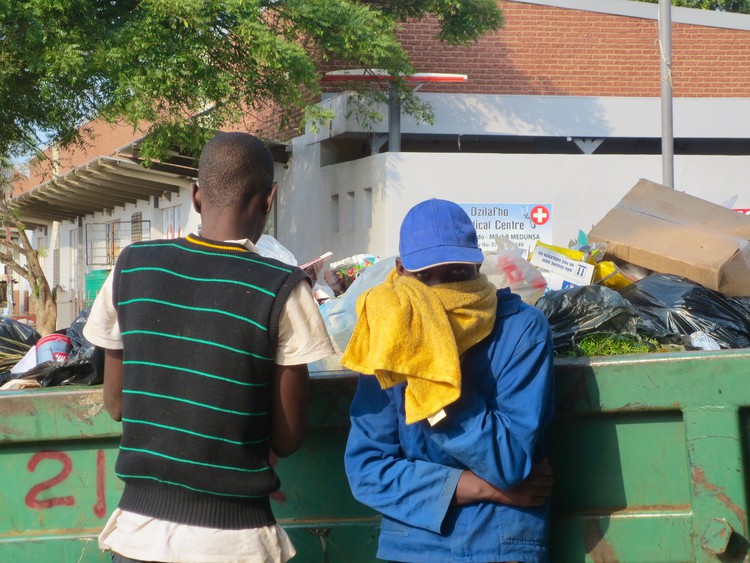 Youths wait for any leftovers that may be dumped in a skip bin near Shoprite in Louis Trichardt. Photo: Bernard Chiguvare

As the provincial government of Limpopo starts to move people living on the streets into shelters, some say they will resist.

“We are already living under very harsh conditions so we are not scared of this disease. We are not prepared to be taken into shelters,” Classmore*, a 16-year-old Zimbabwean immigrant, told GroundUp.

Classmore was with a group of seven homeless Zimbabwean teenagers, all aged between 14 and 16, who live in an open space behind the Spar in Louis Trichardt town. They came from Masvingo and Mwenezi to South Africa looking for employment. Now during the day they wait at a skip bin near a Shoprite store looking for any food that is dumped.

Classmore arrived in 2015. He said he had a bad experience in 2016 when he stayed in a church-run shelter in Musina. “No one will take care of you there. At times you go for almost a day without food. It is better to stay in the streets or bushes, then wake up in the morning and scavenge for food in bins,” he said.

Asked about physical distancing to avoid Covid-19, he said, “We do not have blankets so we sleep close to each other for warmth and we trust no one will get sick.”

Another in the group, Bernard*, said he had wanted to save up money to return to Zimbabwe but he was caught by the lockdown.

“Both my parents are not working. Life was tough at home, so I decided to come to South Africa for any casual job, so that I could feed the family back home. But it was unfortunate this Covid-19 operation caught me unaware and not prepared,” he said.

“I am not sure what to do. Should we be relocated to shelters it makes me afraid, because we will be many at one place,” he said.

The Limpopo government has identified six shelters to accommodate homeless people during the lockdown period: Makhado, Lephalale and Tzaneen will each have one shelter, and Musina will have three.

According to Kenny Mathivha, spokesperson for the Premier, Limpopo does not have a big homeless population.

Witness Tiva from the Limpopo Department of Social Development estimated there are about 315 homeless people in Musina.

*Surnames withheld to protect the identity of the youths.