Covid-19: Banned from collecting firewood, grandmother cooks over a fire of plastic bottles

“The food tastes horrible and the smoke makes us cough,” says Mona Sias of Cookhouse 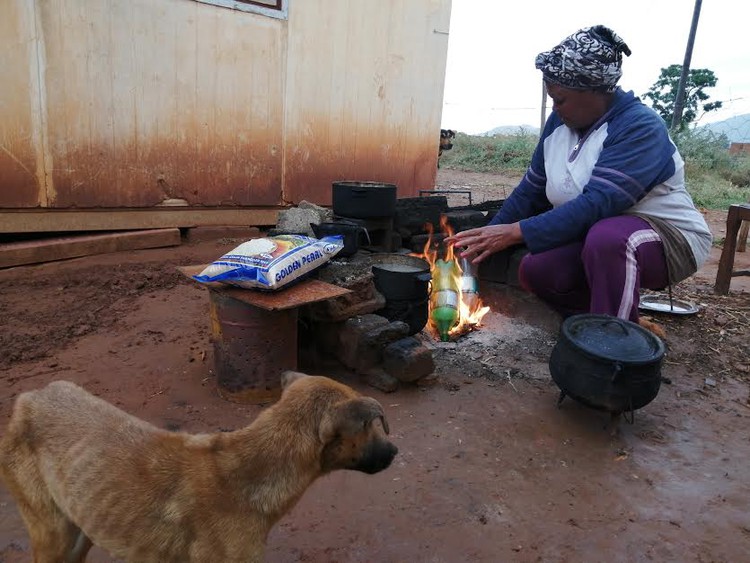 Mona Sias has resorted to cooking over a fire made with plastic bottles. Photo: Mkhuseli Sizani

Because of lockdown, police have stopped Mona Sias and her family collecting wood in the bushes near her home in KwaNoxolo in Cookhouse, in the Eastern Cape. She now cooks her family’s meals over a fire made from plastic bottles.

Sias is among at least 60 households in the township who say they are battling to make a fire to feed their families or stay warm, because they are stopped from leaving the area. “Police chase us away from nearby bushes where we collect wood,” says Sias. “I have been cooking rice, carrots, cabbage and mealie meal porridge with these plastic bottles. The food tastes horrible. It’s colour turns black on top because of the smoke. The food is not properly cooked because the smoke makes us cough and sometimes it causes headaches and blocked nose. But we just cook to have something in our stomachs.”

“It is also not easy to get these plastic bottles because police are watching us. We collect them at illegal dumping sites and in the streets in the community. But police say we must go back home and obey the lockdown ,” Sias said.

Contacted by GroundUp, the mayor of Blue Crane Route Local Municipality Bonisile Manxoweni promised to raise the issue in a council meeting. But he did not say whether the municipality would provide people with fuel.

Sias explained that most residents of KwaNoxolo moved there in 2010 from Tyoksville. They were moved into wendy houses by the municipality as a temporary solution while a new housing project was to be built, but the project did not materialise. Residents say their houses are weathered and leaking and the roads around the area are muddy. The households share three communal taps, and 11 toilets of which only five are functioning.

Last Wednesday, Amakhala Emoyeni Cookhouse Community Trust donated food parcels to residents of KwaNoxolo. When GroundUp arrived, Sias, 56, was trying to make a meal for her family of six.

“Everybody here received food parcels but we are unable to cook. On Sunday night I was able to cook a decent meal with a piece of plank I had used to cover the hole on my floor. Since then I have been using plastic containers, soft drink bottles, plastics and boxes to cook food,” she said.

She said her family depended on the child support grants of her two grandchildren and therefore could not afford paraffin.

Resident Simphiwe Blom said maintaining good hygiene during the Covid-19 outbreak was near impossible in KwaNoxolo.

“We share 11 broken bucket system toilets and only five are functional. They are stinking and everybody sees you when you are relieving yourself. For a month the buckets were not collected. People were forced to relieve themselves in nearby rubble behind our houses. All that smell comes into our homes.”

He said the toilets had at last been emptied last Wednesday when the food parcels were handed out.

He shares a tap with about 26 households and is worried about the coronavirus epidemic. “They come to the tap daily and I live with my grandmother who is 85. Anyone who gets infected here, can easily infect all of us,” he said.

Another resident, Michael Vunati, who was born in Cookhouse, said, “Everybody here makes wood fire in order to make himself warm and for cooking. But the lockdown is just making our lives miserable.”

“Some of the people here have big families of six to ten people.”

Bhongolwethu Mema organiser of Masizame Trust said in 2015 the municipality had been given “more than 1,000 hectares of Trust land” to build houses and a graveyard for the KwaNoxolo residents. “But there is no progress. It is just fruitless meetings and boring Council procedures.”

Mayor Manxoweni said the municipality had been waiting for an environmental report from the Department of Human Settlements which had now been received and would be tabled in the council “soon”. The Department had also been asked to pay for infrastructure costs such as water and sanitation for the construction of 600 houses.

“The Department of Water and Sanitation has given us 115 water tanks and we are distributing them all over the municipality to make sure everybody has access to water,” he said.