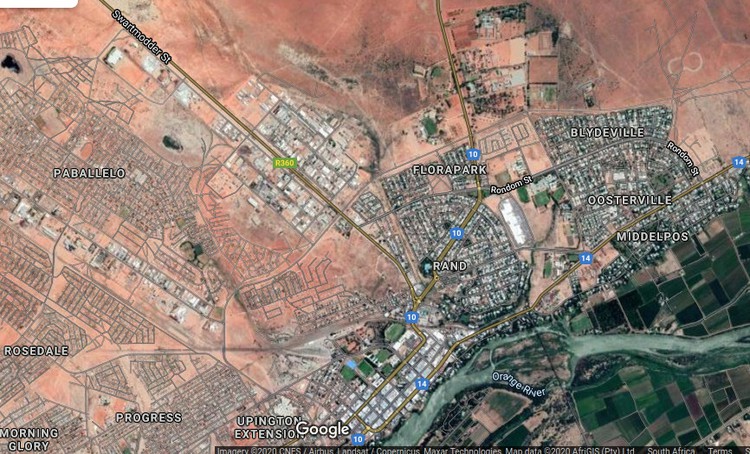 False information about Paballelo, a township in Upington, resulted in six men losing their wages. Satellite view of Paballelo and Upington from Google Maps

A voice note warning people not to attend a funeral in the Upington township of Paballelo because it had become a Covid-19 hotspot, set off a chain of events which caused six workers to lose 11 days of wages.

It’s a story that shows how both fake news and misunderstandings about Covid-19 can cause serious problems for people.

The voice note was sent, apparently, by a Paballelo resident to members of her family in which she warned them not to attend a funeral in late May. She said the township was a Covid-19 hotspot and might be quarantined by early June.

Rumours of Paballelo being a hotspot — it hasn’t been one by the government’s definition, nor has any neighbourhood been earmarked for quarantine — then circulated around Upington.

This resulted in six of 24 workers at a popular Upington restaurant — open for takeout under level 3 conditions — being asked not to return to work till later in June. The six are from Paballelo.

The workers approached COSATU. The union’s district secretary for the ZF Mgcawu district, Phindile Rafisa, met the restaurant owners and reported back to the workers that the owners had told him that a SAPS captain had said Paballelo was a Covid-19 hotspot. Several people were said to have been infected at a funeral on 23 May, including church leader Mzimkhulu Gongo.

But when GroundUp visited Gongo on 7 June he said he was fine and his Covid-19 test results had come back negative.

The consequence of all this confusion was that the six workers lost 11 days of wages. (It’s not clear if the restaurant may still pay them.)

Provincial communications head of SAPS Brigadier Mohale Ramatseba confirmed that the police officer who spoke to Rafisa was based in Upington “and the allegation that he told the business owner that Paballelo is a coronavirus hotspot is being followed up”.

About the voice note from the Paballelo resident, Ramatseba said: “Detectives … followed up on the voice note and the person was located. It was discovered that the sender of the message only wanted to scare off people not to visit her house”.

“It is a resident of the township and her identity will not be disclosed,” said Ramatseba.

No further investigations would be conducted, he said.

Section 11 (5) of the Covid-19 regulations published on 20 March under the Disaster Management Act states that it is an offence to publish any statement “including social media, with the intention to deceive any other person” about the infection status of any person or any measure taken by the government to address Covid-19. Such an offence is punishable with a fine and/or imprisonment of up to six months.