“The closure of beaches has taken away our daily bread” 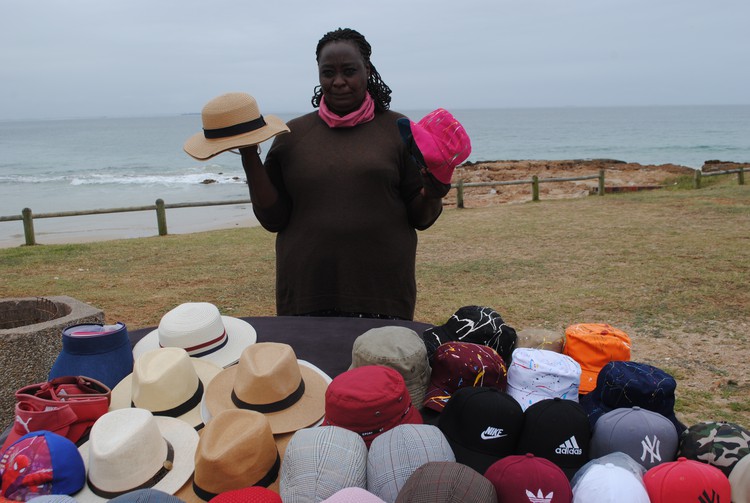 Regina Njunguna has made a living selling goods at Hobie Beach for ten years. But the beach closure has slashed her income. Photo: Mkhuseli Sizani

Traders and musicians are struggling to make a living at Hobie Beach in Port Elizabeth since the beach ban on 15 December.

Some vendors have been there for ten years, providing for their families by selling sunglasses, caps, hats, beads, wooden art, paintings, necklaces, and bracelets at the beach in Summerstrand. But now, they say, they battle to pay for food and rent.

When we visited the area on Sunday, two vendors were competing for customers.

“The closure of beaches has taken away our daily bread,” said Willie Ngugi. “It’s only the two of us today because of the rain but we are so desperate just to sell our stuff. I have been here since 8:30am but business is very slow. Some customers don’t even want to touch our items for fear of the virus.”

The father of two said, “For ten years, this beach has been a source of income for 12 of us. Tourists and Boardwalk Casino clients supported our business. We used to sell a necklace decorated with plastic sea shells for R70 to locals but the tourists would pay R150 for it. During the festive season we were making a lot of money that helped us to even support our families back at home.”

The vendors are worried that they might lose their accommodation and also not be able to send their kids to school.

“On a good day we were not making less than R800 to R1,000. The last time I made R500 was during the last week of December. Today, I only managed to make R250 and R80 will be for transport. Four vendors who specialise in selling beaded wire, paintings and wooden art to tourists have decided to quit because no one is buying their work.”

Ngugi, who is from Kenya, says, “Since October we have not been able to send money to our families back at home. I have been supporting my two unemployed brothers, their wives and their five children. I used to send them R700 and R80 on top for the transaction in order for them to buy food. But the money I make now is only enough to buy bread for my two daughters and wife. If this situation continues I won’t be able to pay my rent of R2,800 a month and send my kids to school.”

His colleague Regina Njunguna said, “I came to this country ten years ago to make a living for my family. Life has been good for me all these years. But the closure of the beaches has turned it upside down.

“Today I only managed to make R80 by selling a pair of sunglasses and a packet of cigarettes. This will only be enough for me and my granddaughter to buy bread.”

“I really don’t know where I will get the R3,500 to pay my rent next week. If the schools open and the situation is still like this I won’t be able to pay for my granddaughter’s school fees and her R70 daily taxi fare,” she said. 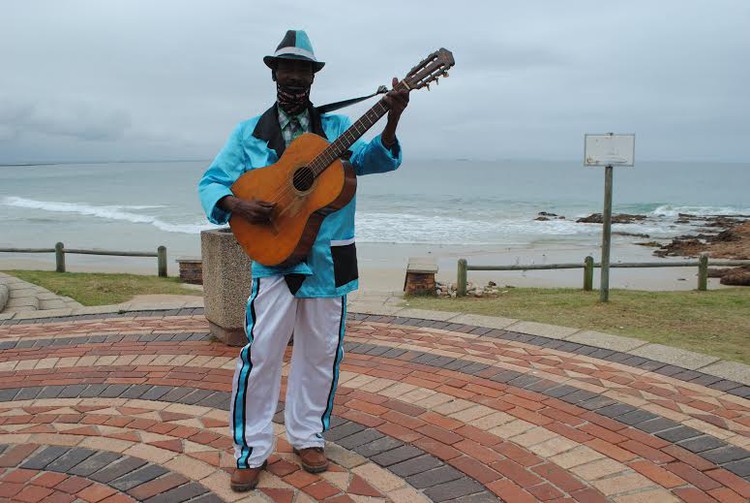 Musician Ricardo Goliath used to play in a quartet. But since the Covid-19 lockdown, he can only play as a soloist. Photo: Mkhuseli Sizani

Near the vendors, street musician Ricardo Goliath is also battling. Goliath, who comes from Helenvale where gang violence is common, has been surviving for 20 years by singing at Hobbie Beach and outside restaurants with his group, the Madiba Bay Coons.

During the festive season they used to entertain customers in front of Wimpy and KFC with soul, ballads, jazz and country music.

But at 4pm on Sunday, Goliath was already going home. “From dawn till dusk during the festive season we used to entertain our fans here and make a lot of money. We used to perform as a quartet. But due to Covid-19 precautionary measures we are only allowed to perform as soloists.”

“We used to get between R600 and R1,000 in tips. The tourists even took our videos to play them overseas. They even tipped us in dollars and pounds.”

Goliath said he only now sings to buy bread. “We used to come here regularly on normal days. During the weekends we used to get good tips. But today I only arrived here at 11am just to come and make tips to buy bread for my three kids who are 2, 7 and 10 years old. I have managed to only make R110 but still I have to deduct R44 for a taxi fare. Sometimes I hitchhike to get back home in order to save my tips for food.”

He says he gets social grants for his three children. “But that money is not enough because we are renting a backyard shack for R400 a month.”

“The closure of beaches is really hurting us because we have no other source of income. We chose to sing and not be part of gangs in our community.

“We appeal to the government to do something for street musicians like us. Food parcels, we would appreciate that,”Goliath said.