Covid-19: Court decision is a heavy blow to waste-pickers’ hopes

Recyclers are not essential services during lockdown, court rules 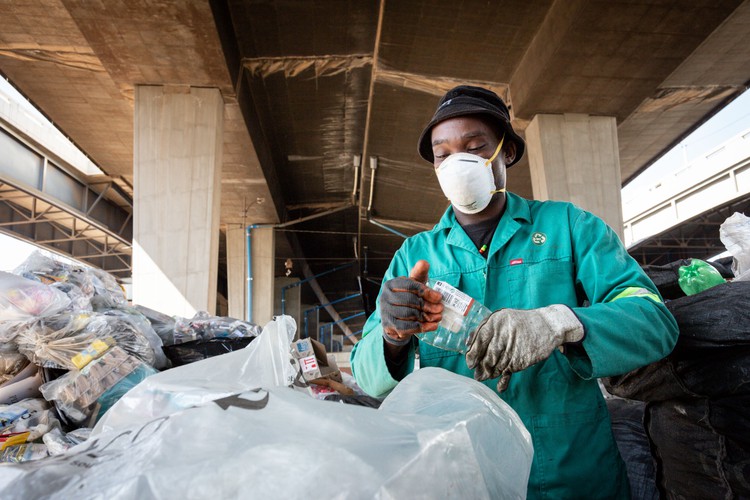 Luyanda Hlatshwayo sorts waste in the informal settlement of Bekezela, Johannesburg, last month. Luyanda is the head of the African Reclaimers Organisation, which has been unable to sell waste collected before the lockdown now that processing plants have closed. Photo: Yeshiel Panchia

The North Gauteng High Court has dismissed an urgent application by Lawyers for Human Rights (LHR) on behalf of reclaimers and waste-pickers demanding recognition as essential service workers.

Between 60,000 and 90,000 waste-pickers are responsible for collecting 80 to 90% of used packaging and paper that is recycled in South Africa, according to a study by the Council for Scientific and Industrial Research (CSIR).

During the lockdown to help slow the spread of the Covid-19, reclaimers had hoped for permission to continue working. Louise du Plessis, from LHR, says they wanted limited movement for reclaimers on days that rubbish is usually collected in the areas that they operate. The organisation said in a statement that although the fight against Covid-19 is important, care must be taken to ensure that the most vulnerable members of society do not suffer disproportionately.

In her answering affidavit in court, Minister of Cooperative Governance and Traditional Affairs Nkosazana Dlamini-Zuma said “the applicants’ contention that they should be regarded as an essential service … is opportunistic.” She said “the work that the applicants are engaged in does not entail waste and refuse removal, at least not in the conventional sense.” Instead, she said, the applicants are engaged in an economic activity. “It entails the collection and sale of abandoned material.”

Dlamini-Zuma said “presently the law prohibits that which the applicants want to do i.e. the roaming of the streets freely with the risk of spreading the coronavirus” and that regardless of protective measures, “not only will the applicants, but many other South Africans … be exposed to unnecessary risk. In some instances the risk may involve the death of other South Africans.”

The acting City Manager of Tshwane, Mavela Dlamini, told the court in an affidavit that it was “a regrettable but unavoidable consequence of the regulations that many self-employed people and small business owners are prevented from engaging in economic activity during the 21-day lockdown”, but that the waste-pickers in question “fall within the category of the self-employed and their lament at being unable to work and generate an income is undoubtedly shared by millions of South Africans who find themselves in the same circumstances.”

He said their work “is an economic enterprise, conducted for personal gain, and not an essential service”, adding that even if waste-pickers were granted essential service status, the recycling companies that they sell to would not be, so they would still not be able to earn an income.

Both Dlamini-Zuma and Dlamini said the law made a distinction between waste recycling and the essential service of waste and refuse removal, which should be understood to mean only official municipal waste removal services and their affiliates.

In her affidavit, Minister of Environment, Forestry and Fisheries Barbara Creecy said she acknowledged the extreme hardship waste-pickers were facing and that “under normal circumstances” they played “an integral role”.

“Unfortunately, no amount of appreciation and recognition can in the present lockdown situation elevate the work that the applicants do to fall within the definition of essential services.“

“We are the backbone of the recycling economy”

Luyanda Hlatshwayo is a resident of Bekezela informal settlement in Johannesburg, a community of about 500 people, more than half of whom earn their living from waste-picking. He is a founding member of the African Reclaimers Organisation, which helps the community pool its resources to increase its productivity and yield.

”Reclaimers want to continue making a living for themselves,” he says, looking towards where Bekezela residents are sorting materials collected before the lockdown that they can no longer sell. He knows there are risks and says reclaimers had been requesting protective equipment and sanitising materials long before the Covid-19 crisis hit.

He says as recommended by the Global Alliance of Waste Pickers, reclaimers had already started practising social distancing and elbow-greetings before the lockdown was announced, and had only ventured out alone or in small groups since the start of the pandemic. They had started community education drives on the importance of regular and thorough hand-washing and the use of waterless sanitisers and personal protective equipment. But Bekezela has just six taps that service all its residents. Hlatshwayo says sanitising stations and protective gear from the government would go a long way to ensuring their safety.

The Global Waste Pickers Alliance also recommends that members of the public should separate, wash and disinfect their recyclable materials for collection and ensure that tissues, medical waste and other possibly contaminated materials are placed in clearly marked bags and not mixed in with recyclable waste. This, as well as putting out soapy or bleached water for reclaimers to wash their hands in, could help reclaimers keep safe while collecting in hazardous times.

Hlatshwayo says, “Whatever will happen will happen, and we will either survive or we won’t. But I am scared for the next generation.”

“We are environmental agents; we are the backbone of the recycling economy,” he says, carefully removing his facemask and gloves before disinfecting his hands with a solution of bleach and water. “Without reclaimers, most of the landfills would be closed by now. After the lockdown we’re going to have a problem with the amount of plastic floating in our environment.” 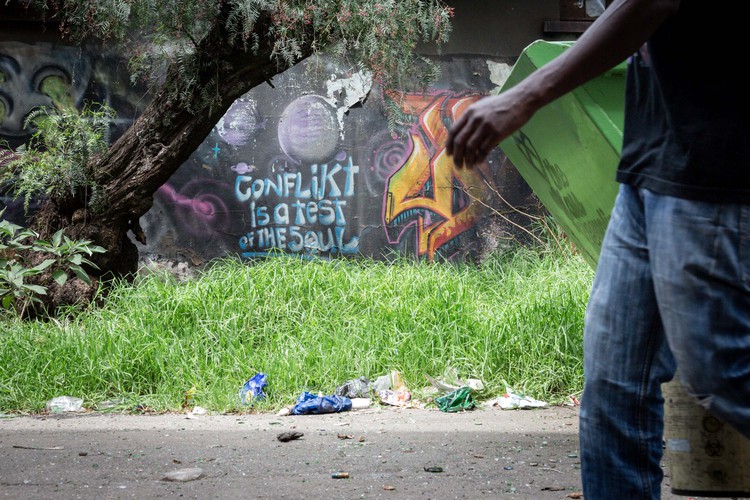 In Bekezela, Johannesburg, where many residents earn money through waste collection, surviving during the lockdown is a near insurmountable task. Photo: Yeshiel Panchia

According to the CSIR study, waste-pickers save municipalities up to R750 million in landfill costs annually, without local governments having to fork out a cent. Hlatshwayo and the others survive off the money they receive for selling the reclaimed materials they collect, which averages around R75 per day.

Melanie Samson, senior lecturer in Human Geography at Wits University, led the recent national stakeholder process to develop the Department of Environmental Affairs Guidelines on Waste Pickers Integration for South Africa. In an article at the start of the lockdown, she argues that government failure to recognise reclaimers as part of essential services places additional strain on waste management at a time when waste removal needs to happen as efficiently as possible.

“On the Tuesday before the lockdown, 30 reclaimers in an ARO pilot project collected 4.4 tonnes of recyclables from two Johannesburg suburbs,” she writes. If 8,000 waste-pickers (the City of Johannesburg is believed to have between 6,000 and 10,000 operating at any given time) collect similar amounts, the municipal load is reduced by almost 6,000 tonnes per week, she points out.

Zimbabwean Andrews Chenai* has been collecting recyclable materials from the garbage bins in Johannesburg’s wealthier suburbs for the better part of 15 years. He says recycling is the only way he knows to earn an honest living. He says he is not worried about getting sick, but he is worried about starving, and about what may happen if the police or army stop him. He has no documents, let alone a lockdown permit.

Beauty Ncube has been supporting herself and her teenage children by selling reclaimed waste to larger waste management and recycling plants. Her regular buyers have closed for the duration of the lockdown. She first started recycling in 1993. “If I’m sitting down then I’m going to starve. It’s important for me to work and to work with my hands. I have two children…” Her words trail off as she looks at the bags upon bags of unsold recyclable material that surround her. “And it’s very important to recycle.”

Creecy’s department has started distributing food parcels to informal recycling communities in Midrand and on Monday 13 April she announced that relief had been secured for destitute waste-pickers countrywide.

“Working with industry and the waste reclaimers associations we will be distributing electronic food vouchers to waste-pickers’ cell phones over the coming days,” said Creecy. The packaging industry has donated R785,000 towards the relief efforts.

“We are aware that this will not resolve all of their concerns, because the money that is usually sent home will be lacking, but it will help,” said Du Plessis from Lawyers for Human Rights.

The organisation said it may still pursue further legal action.