Covid-19: Clinic staff serve patients through a fence in Uitenhage

NEHAWU concerned about lack of patient confidentiality being exercised by staff 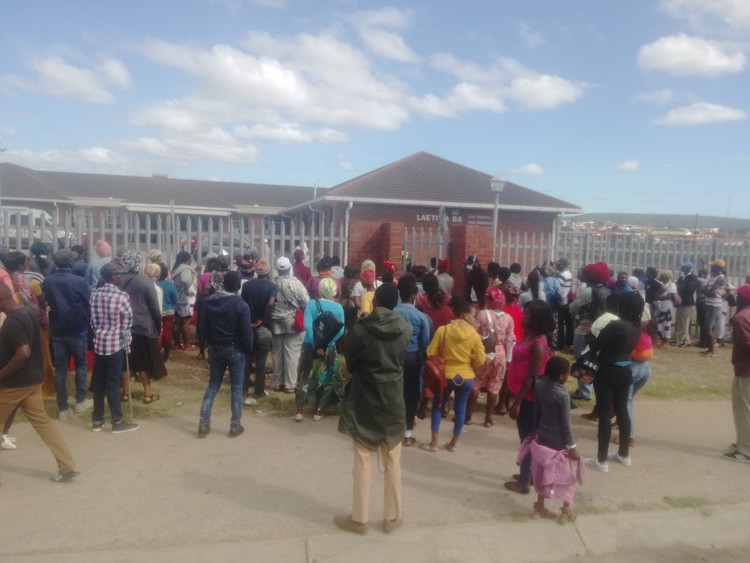 Patients were served through the fence outside the Laetitia Bam Day Hospital on Thursday. Photo: Thamsanqa Mbovane

Dozens of patients were served through a palisade fence outside the Laetitia Bam Day Hospital in KwaNobuhle, Uitenhage, on Thursday.

Staff at the hospital, which is the biggest local facility in the area, were limiting the number of people inside the facility in order to maintain social distancing. However, patients became rowdy, voicing their unhappiness when staff began shouting out names and asking them to queue according to their illnesses.

Elderly people, children, pregnant women, and people collecting HIV and TB medication were among those forced to speak to nurses who were wearing masks through the fence.

One of the five nurses serving people outside was seen calling out patients’ names and then going to collect their medication inside. Another staff member squeezed through the crowd and put a box of condoms on the ground, saying: “Those who won’t be allowed to do birth control during lockdown must please use condoms. Here they are … We will do birth control again from 16 April.”

Thobeka Ntsotho said nurses had promised them that a tent would be put in the clinic yard with chairs but this never happened. “We used to queue inside and sit in chairs, but today we stood like farm sheep,” she said.

Busiswa Stokwe, regional secretary of the National Education, Health and Allied Workers Union (NEHAWU) said, “People are being told to practice social distancing yet in this government institution they [management] don’t care if it happens or not. The way our people are being treated there is inhuman. There is no patient confidentiality because people have to publicly disclose why they came to the clinic. We are going to meet the district management and ask about their plan for the institution.”

Ward 44 Councillor Nomsa Booi (ANC) said, “We have been inundated with calls about the situation but we will go there [on Friday] with sanitisers for the crowd.”

Eastern Cape Health Department spokesperson Sizwe Kupelo said, “Due to the Coronavirus, health facilities have to comply with social distancing, but the picture [sent to him by GroundUp] doesn’t portray that.”